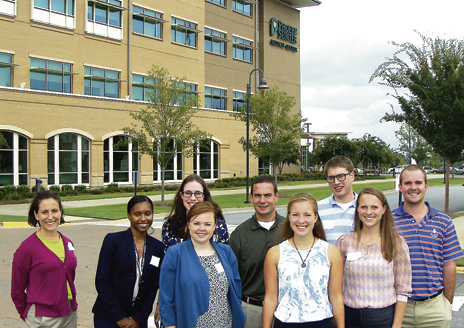 The Mercer medical students pose in front of Phoebe Sumter after the tour.

AMERICUS — Future physicians had a chance to view the current landscape of healthcare in Americus and Sumter County when first-year pre-med students from the Mercer University School of Medicine toured Phoebe Sumter Medical Center’s state of the art medical campus.
The tour of Phoebe Sumter was part of the annual Windshield Tour of Americus by Mercer School of Medicine pre-med students and included visits to Sumter County Health Department and Sumter County Department of Family & Children Services. The windshield tour of Americus, in which the students visited landmarks of the city, was courtesy of South Georgia Technical College.
The students and their advisors visited the Phoebe Sumter campus and spoke to a number of employees as well as physicians during the tour. In addition to touring the three outpatient clinics, the students also toured the 76-private bed, 183,000 sq. ft. hospital facility, which opened in December 2011, and was recently named Most Beautiful Hospital in the U.S. by Soliant Health after winning a nationwide contest. During the tour of the hospital, which features a rooftop garden and state of the art technology, the students had an opportunity to ask staff members questions about the current facility and what it took to recover from the 2007 tornado that destroyed the old one.
Phoebe Sumter CEO Brandi Lunneborg welcomed the students during lunch and they also heard encouraging words and advice from gynecologist Wallace Mays, MD, John Fennessy, MD (orthopedics) and Michael Busman MD (family & sports medicine). Also on hand was Angel Lamb, director of Medical Staff Services & Physician Recruitment at Phoebe Sumter.