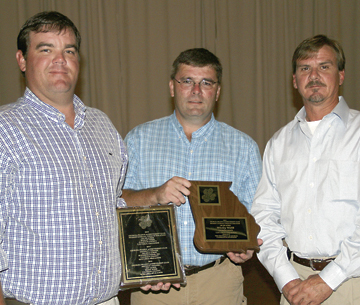 JEKYLL ISLAND — Each of Georgia’s top 10 peanut farmers relied on University of Georgia Cooperative Extension research to produce the highest yielding crops this year. These farmers were honored by the peanut industry this month for growing the year’s record-breaking crops.
“We lean on the Extension service heavily because they are there to answer questions and they have the experience,” said Wesley Webb, who has farmed peanut, cotton and corn in Calhoun County for 22 years.
Webb was one of 10 Georgia peanut farmers recognized on Aug. 8 by the Georgia Peanut Achievement Club. The peanut achievement club, coordinated by UGA, has recognized the top-yielding growers in Georgia since the 1960s.
Webb averaged 7,337 pounds of peanuts per acre on 136 acres.
“I can run to talk with Jay (Hathorn), my local county agent, and Jay can pick up the telephone and reach anybody, anywhere in the state of Georgia if we’ve got a problem,” Webb said. “It’s kind of like the Internet. All I do is talk to Jay, and Jay can find my answer through the Extension service.”
Webb said, through his county agent, he gets research-based information straight from UGA scientists like plant pathologist Bob Kemerait, weed scientist Eric Prostko and peanut agronomist Scott Monfort.
“He gets them on the phone in minutes and they answer any question I have,” Webb said.
The process of relaying the latest information to farmers through UGA Extension is based on trust. Georgia farmers and UGA Extension agents have to forge a trusting relationship for the process to be successful, said Hathorn.
“I like to say people don’t care what you know until they know that you care. Farmers have a trust in Extension, and a trust in the scientists, and a trust in the county agents to give them good, research-based information that they can use with their crops,” said Rome Ethredge, the agricultural and natural resources (ANR) agent in Seminole County.
Ethredge accompanied Seminole County farmers Eddie Miller and Greg Mims to the peanut achievement club’s recognition banquet, held at the Jekyll Island Club at Jekyll Island Miller was recognized for posting the highest overall yield in the state for farmers with 300 or more acres. He averaged 7,135 pounds per acre on more than 620 acres. Mims was the District II winner, a title that recognizes the farmer with the highest yield (6,628 pounds per acre) on more than 700 acres.
Monfort said the weekend was a testament to the work of Extension, including UGA research faculty and county agents, and Georgia producers across the state.
“This movement of information – from the researcher down to the agents to the farmer – is reciprocated back to us because we need that feedback. We need to know what works,” Monfort said. “We know what works in research, but when we put it to real world practice, does it work for these growers? Most of the growers in this particular program are going by university recommendations.”
Farmer Ken Hall uses UGA recommendations to improve his farming practices in Worth County. On 1,082 acres last year, Hall produced 4,905 pounds of peanuts per acre, the most in District III on more than 700 acres. Hall leans on Worth County ANR agent Larry Varnadoe for answers to questions that arise during the year.
“Rather than us go out and try something that may cost extra money or lead to damage to our crops, it’s best to call them (UGA Extension agents) ahead of time. Nine times out of 10, they’ve already tried it and they can say, ‘Yes, you can,’ or ‘No, you can’t,’” Hall said.
Along with the UGA peanut team, supporters of the peanut achievement club include Bayer, BASF, the American Peanut Shellers Association and the National Peanut Buying Points Association.
The 2014-2015 Georgia Peanut Achievement Club winners are as follows:
• Highest overall yield in the state, 100-299 acres
Wesley Webb, Calhoun County
7,337 pounds per acre on 136 acres
• Highest overall yield in the state, 300 or more acres
Eddie Miller, Seminole County
7,135 pounds on 620 acres
• District I, 300-699 acres
Al Sudderth, Calhoun County
6,610 pounds per acre on 488 acres
• District I, 700 or more acres
Jimmy Webb, Calhoun County
6,728 pounds on 897 acres
• District II, 300-699 acres
Rick LaGuardia, Miller County
6,646 pounds per acre on 377 acres
• District II, 700 or more acres
Greg Mims, Seminole County
6,628 pounds per acre on 890 acres
• District III, 300-699 acres
Hulin Reeves Jr., Ben Hill County
6,328 pounds per acre on 487 acres
• District III, 700 or more acres
Ken Hall Farms Inc., Worth County
4,905 pounds per acre on 1,082 acres
• District IV, 300-699 acres
Chip Dorminy, Irwin County
5,874 pounds per acre on 436 acres
• District IV, 700 or more acres
Wayne Sayer, Irwin County
4,926 pounds per acre on 1,129 acres

For more information on peanut research from UGA Extension, go to http://extension.uga.edu/agriculture/crops/peanuts/ 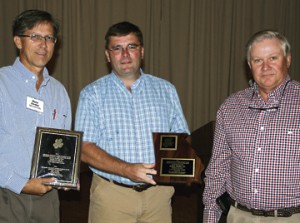 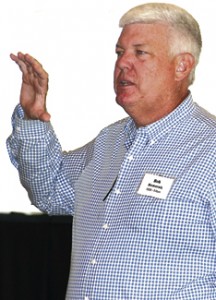