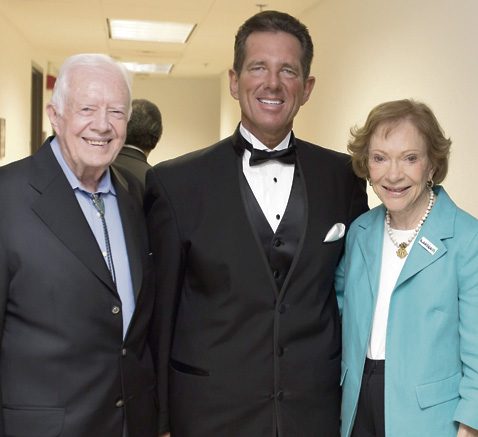 David Osborne, center, with Jimmy and Rosalynn Carter on the former president’s 90th birthday, in 2014.

PLAINS — David Osborne, internationally known Steinway recording artist, will perform a birthday piano concert for his friend Jimmy Carter. Osborne has performed for the former President for 30 years. The concert for family and friends of Carter will be held at 3 p.m. Oct. 3 at Maranatha Baptist Church. Pastor Jeremy Shoulta of Maranatha has extended the invitation to the church members as well as family and friends of Carter.
The program this year will entirely be a solo piano concert and will feature Osborne on the largest, most exquisite Steinway “D” Concert Grand available in the world today. The piano is entirely hand made. The music will feature Broadway shows, classical themes, traditional hymns, popular selections and favorites of Jimmy Carter.
Osborne met President Jimmy Carter at a book signing in Orlando, Fla., in the mid 1980s. The two made friends and Osborne began traveling to Plains several times a year to play for Carter. The relationship has continued for three decades. Carter has referred to his favorite pianist David Osborne as “one of the finest pianists in the world.”
Osborne is a regular performer in Las Vegas at the Bellagio Resort. Following the concert, Osborne will embark on a month-long tour of cities across the United States.