Photo by Tammy Satterfield: Brandilyn Cromer keeps a toe on first base as she dives to catch a throw that fell short, putting out a Hawkinsville runner in the Lady Wildcats’ Sept. 17 match against the Lady Red Devils.

The Schley County Lady Wildcats got a slow start in this year’s softball season, but have been steadily gaining steam over the last several weeks. Recently, the Lady Wildcats have sparked a three-game winning streak that began in the beginning of September, bringing in substantial wins over Taylor, Marion, and Dooly Counties. An unfortunate 10-5 loss to Hawkinsville broke the Lady Wildcats’ streak on Sept. 24, leaving the team with a 5-7 overall record so far this year.
First-year Lady Wildcats head coach, Jody Sellars recently spoke with the Times-Recorder about how the team has managed to turn around the season after a shaky beginning for the Ellaville girls.
The season’s rough start is understandable, seeing as the Lady Wildcats lost over one third of the team’s 2014-15 roster, which had propelled the Schley crew to an elite-eight appearance last season. That’s certainly not to say that the team is inexperienced this year, however. With seven senior players leading the team, Sellars seemed confident that the girls were over the beginning of the season blues and ready to jump into the race for the playoffs.
The team’s come-back streak began on Sept. 1, with the Lady Wildcats taking a much-needed 11-3 victory over the Taylor County Lady Vikings at home. Schley pulled ahead early in the match and gradually increased the cushion throughout seven innings to grab the region victory.
Junior Brandilyn Cromer and sophomore Laine Frazier set the pace for the Lady Wildcats, each bringing in five RBIs. Seniors Bethany Phillips, and Bailey McLaine, both crossed the plate twice as did Emily Campbell, who drew a pair of walks to get on base. Phillips batted two for four and McLaine hit one of two. The Lady Wildcats gained nine hits in the match.
Frazier pitched the wining game for the Lady Wildcats, striking out one batter and giving up six hits.
The team hosted the Dooly County Lady Bobcats on Sept. 8, in what can barely even be called a contest. From the beginning of the match-up, everything went right for the home team while the Lady Bobcats seemingly fell apart as Schley’s girls cruised to a 24-0 region win.
Still riding the wave of excitement that follows such an unprecedented victory, the Lady Wildcats hosted longtime region rivals, the Marion County Lady Eagles on Sept. 15.
Tough defense from both teams kept the scoring tight before Carley McLaine nailed a single in the fourth to put two runs on the board for the Lady Wildcats.
Cromer then hit a double in the sixth to open the game up and Schley’s girls took the plate with a 3-2 lead going into the final inning. Three more runs in the final frame for the Lady Wildcats put the game out of reach for the Lady Eagles, solidifying Schley’s third region win of the month.
Carley McLaine hit two for three, bringing in two RBIs while her sister, Bailey hit one for three, bringing in one RBI. Taylor Norris hit two for three as well, bringing in one RBI and crossing the plate once. Frazier nailed a double in her only hit of the match and scored one run. The Lady Wildcats gained seven hits total in the contest.
Frazier, again, pitched the wining game, striking out one batter and giving up only six hits.
Schley hosted the Hawkinsville Lady Red Devils on Sept. 17, taking the team’s only loss so far this month as the visiting team grabbed an early 8-1 lead. Schley’s girls defiantly fought their way back to an 8-5 deficit, but couldn’t overcome the gap and Hawkinsville won the match 10-5.
Campbell contributed two RBIs to the game, while Bailey McLaine hit three for four, bringing in one RBI. Campbell and Bailey each stole one base to aid the Schley cause. Frazier hit three for four as well, including one double. Carley McLaine hit two for four with a stolen base.
Speaking with the Times-Recorder, Sellars praised Frazier’s pitching, saying, “She’s not overpowering, but she’s accurate and manages to move the ball around a lot.”
With this quality of play, the Lady Wildcats will likely secure themselves a spot in the playoffs. Sellars told the Times-Recorder, “If we can continue playing like we have been and enter the playoffs as the tenth seed or better, I fully expect that our team will be among the last four teams standing.” “Our girls do the small things right,” he continued. “They are really good at minimizing mistakes and capitalizing on opportunities.”
The Lady Wildcats return to action on Sept. 21, facing Perry High School in Perry before hosting Wilcox County on Sept. 23. 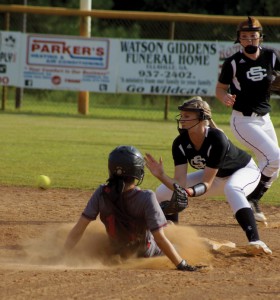 Jessica Reese prepares to scoop up a toss and tag a Marion county runner in the Lady Wildcats’ Sept. 15 match against the Lady Eagles.