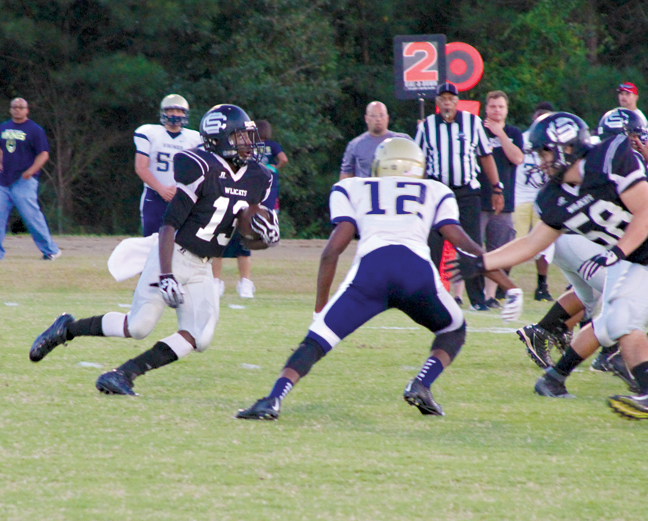 Calvin Sims takes off with the ball in the first quarter of the Wildcats’ match against the Taylor County Vikings.

ELLAVILLE – The Schley County Wildcats hit the gridiron in Ellaville again last night, hosting the region 1-A Taylor County Vikings for the team’s third match of the season. The Wildcats ran into trouble early in the match as they had difficulties stopping a Viking squad loaded with nimble-handed receivers and an experienced quarterback.
Schley suffered a 49-13 defeat at the hands of the Vikings to bring the team’s overall record to 0-3 on the season.
The Vikings struck first late in the opening quarter, scoring a touchdown and an extra point with three minutes left in the period to put them ahead 7-0.
Schley answered on their return possession, with a 20-play, 60-yard drive that ended with sophomore, Alec Harris, plowing through the Viking defenses to break the plane with 4:44 left in the first half. Tyree Hawkins then split the uprights for the PAT to equalize the score.
Taylor wasted no time answering, taking advantage of a pair of completions, a trio of hard runs, and a point-after kick to add another six plus one.
A hard Viking defense held the Wildcats to three and out, forcing a Corey Tanner punt. Taylor immediately completed a long pass to put them back in the red zone, but their progress was halted by an interception by the Wildcats’ Dartavious Napper, who plowed his way to Taylor’s 48. With only 30 seconds left in the half, the Wildcats were limited to two plays before the buzzer sounded.
The Vikings opened the second half with a a long completion that landed them in the end zone almost immediately to spark a scoring spree that would last the next six minutes, putting the visiting team ahead 35-7 before the Wildcats saw a chance to answer.
With just over three minutes left in the half, Calvin Sims broke through the Viking line for a 51-yard run to the jubilant cheers of the home crowd. The Wildcats rode this momentum for an 11-play drive landed the ‘Cats at the one. From there, Alec Harris was able to bulldoze through the line and break the plane. The Vikings stubbornly stopped a two-point conversion attempt, holding the score to 35-13 with mere seconds left in the third quarter.
Taylor rode their momentum from the third quarter well into the fourth, adding two more six-pointers and a pair of PATs to take the 49-13 win.
Despite the team’s heavy loss, several of the Wildcats’ offensive players showed a lot of potential, including Napper, Harris, Hawkins, and Sims, who suffered a slight injury in the third quarter. On the other side of the ball, many of the Wildcats’ defenders, including Derric Tatum, Demarco Cross, and Tanner, made some jarring tackles that slowed the Vikings’ progress.
Schley’s boys return to action on Sept. 25, heading to nearby Buena Vista to take on longtime rivals, the Marion County Eagles.
The team will return to Ellaville the next week, on Oct. 2 to battle the Central Hawks. The Wildcats have defeated the Hawks in the teams’ last five meetings.