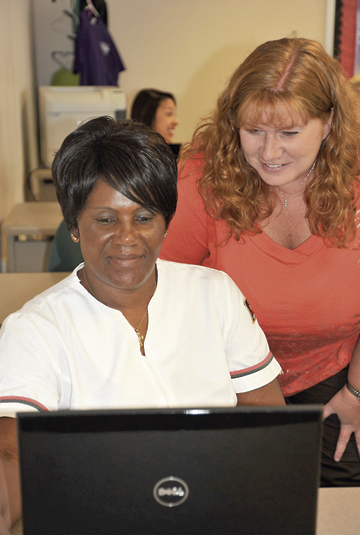 SGTC Nursing Division Chair Jennifer Childs is shown looking over the shoulder of one of her former nursing students on the main campus in Americus.

AMERICUS — South Georgia Technical College (SGTC) was included in the Top 100 of America’s Best Nursing Schools in the eastern region of the United States for 2015 by Nurse Journal, announced SGTC President Sparky Reeves. SGTC was ranked 61st. The ranking was published in Nurse Journal, the Social Community for Nurses Worldwide in its America’s Best Nursing Schools & Colleges 2015 Edition at http://nursejournal.org/articles/americas-best-nursing-schools/.
“This is a tremendous accomplishment for South Georgia Technical College and for our nursing faculty and students,” said Reeves. “This ranking was based on quality, affordability, convenience, satisfaction, and value. We are very pleased to be recognized by an organization that consists of nurses and is designed to educate, inform, and share information with other nurses or those who are interested in becoming nurses.”
Reeves also congratulated SGTC Vice President of Academic Affairs John Watford, Ed.D., Vanessa Wall, Dean over the nursing program, and Jennifer Childs, SGTC Nursing Division chair and instructor on the Americus campus, and Cathy Freeman, SGTC Nursing instructor at the Crisp County Center. “I am so proud of these individuals and what they have been able to accomplish with our licensed practical nursing program. They are training and turning out top quality nursing graduates who will be caring for us in the future,” said Reeves.
“This ranking really speaks to the overall dedication and commitment of administration, faculty and staff to ensure student success,” added Reeves. “South Georgia Technical College is committed to helping students earn an exceptional education and will continue to enhance our educational programs to better serve students and our community in the future.
“In today’s economy, individuals need to know that the education that they are receiving is relevant and valued. South Georgia Technical College and the Technical College System of Georgia are delivering on those two key issues,” added Reeves.
SGTC was ranked 61st in the eastern region of the United States. Only two technical colleges in Georgia were ranked in the top 100, Albany Tech and South Georgia Tech. SGTC had a 96.51 overall score. Georgia Regents University in Augusta was the top ranked college or university in the eastern United States.
SGTC was competing against the University of North Carolina, University of Florida, the University of Alabama, the University of Tennessee, Georgia Southern University, Clemson, Yale University, Valdosta State University, John Hopkins University, University of North Georgia, Georgia State, Auburn, Georgia Southwestern State University, Darton and other top ranked colleges and universities.
Over 1,189 schools were evaluated for the eastern region of the United States to find the best nursing schools in each region of the United States. Twenty different metrics were used for the rankings in five different categories that included: quality, affordability, convenience, satisfaction and value.
“There is no question that the field of nursing is one of the most exciting, rewarding, and in demand professions in America today,” said officials at NurseJournal.org. “According to the Bureau of Labor Statistics, the employment for all registered nursing will grow over 30 percent in the next decade, which is faster than average when compared to other occupations.”
Each college or university could earn up to 30 total points on Quality, which included the NCLEX Pass rate, Institutional Accreditation, Nursing Program Accreditation, Highest Award, Graduation Rate, and Quality. The most points in the Affordability category was 35 points. That category included tuition and fees, financial aid percent, percent of tuition and fees received as aid, student loans and net price.
Convenience was worth 25 total points and included distance education options for graduate and undergraduate degrees, weekend/evening classes availability, and online or hybrid nursing program options. Satisfaction was worth 20 total points and was measured on first to second year retention rate, and Rate My Professor overall and average. The final criteria was Value with 20 points. It was based on salary vs. cost.