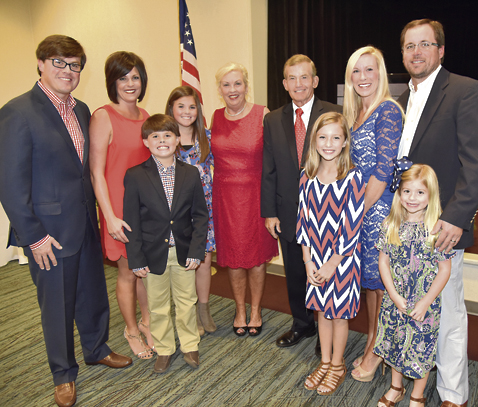 AMERICUS — South Georgia Technical College (SGTC) President Sparky Reeves quoted the lyrics from the Randy Travis “Three Wooden Crosses” song as he thanked the over 500 individuals who attended the special retirement reception held in his honor recently at the John M. Pope Industrial Technology Center on the Americus campus.
“It is not what you take when you leave this world behind you, it is what you leave behind you when you go,” said Reeves as he thanked everyone at the event for what they had meant to him and to SGTC. “I would like to thank each of you for what you have done for our students and our college through your support. You are making a difference here and you are helping to leave a legacy that will impact generations of students.”
Reeves and his wife Allene and their children and their families greeted each of the individuals who attended the South Georgia Technical College Foundation retirement reception held in honor of President Reeves in recognition of his 42 years of service to the college as an instructor, supervisor, vice president of economic development and finally as president.
Janice Davis, vice president of Administrative Services, officiated at the program honoring the Reeveses. She welcomed each of the guests saying, “Sparky Reeves is known for his ‘Every Day is Special’ attitude and tonight we are changing that slightly to say ‘Every one of you are Special!’ Thank you for joining us tonight.”
Davis read a congratulatory note from former President Jimmy Carter and Rosalynn as well as a letter of commendation from Governor Nathan Deal. Kenneth Cutts from U.S. Congressman Sanford Bishop’s office spoke and read from a brief that would be entered into the Congressional Record honoring Reeves.
SGTC Foundation board member and state representative Mike Cheokas spoke about Reeves and read a proclamation from Governor Deal and the Georgia House of Representatives.
Technical College System of Georgia Commissioner Gretchen Corbin stepped to the podium next and commended Reeves for his service and dedication to SGTC  and the Technical College System of Georgia.  She also announced that she still had plans for Reeves to continue working on behalf of SGTC and the Technical College System of Georgia in his new role as President Emeritus.
“We know and appreciate your leadership, vision, and enthusiasm and we are pleased that you will still be able to serve with us in your new role as President Emeritus of South Georgia Technical College,” she said.
Americus Mayor Barry Blount presented Sparky and Allene Reeves with a key to the City and thanked him for his economic development efforts to promote SGTC, the City of Americus and Sumter County.
SGTC board of directors chairman, Willie Patrick, and SGTC  Foundation chairman, Randy Jones both spoke on behalf of the boards and thanked Reeves for his service to the college and to the communities represented by the college’s service area.
Latanya Overby, director of GED Testing Program at the Technical College System of Georgia, also commended Reeves for his dedication to the adult education programs and shared how he had helped thousands of students have a second chance in life by providing them with the opportunity to receive their GED and continue their education toward a career.
Kendall Blanchard, Ph.D., retired president of Georgia Southwestern State University (GSW), thanked Reeves for his friendship and for his support of him during his tenure at GSW. He also commended Reeves for his accomplishments and congratulated him for joining the ranks of the retired.
SGTC Vice President of Academic Affairs John Watford, Ed.D., followed Blanchard and spoke to Reeves and Allene on behalf of the faculty and staff and thanked him for his leadership, caring attitude and passion for economic development and education. He presented Reeves with a small token from the college’s faculty and staff.
Reeves closed out the night by thanking everyone for attending the special reception.
“I am truly humbled by this show of support for me and my family. Each of you are very special,” he said.
He acknowledged former SGTC President Jon Johnson and the impact that he had on the college during his tenure. He also thanked Betty Pope and her family for the foresight to build the Pope Center which has served approximately 20,000 students and community members each year since it was built.
“I thank each of you for allowing me to be a part of your lives,” said Reeves. “I have loved every moment of this and I hope each of you will remember that ‘it’s not what you take when you leave this life behind, it is what you leave behind that matters.’”
Reeves received a standing ovation.