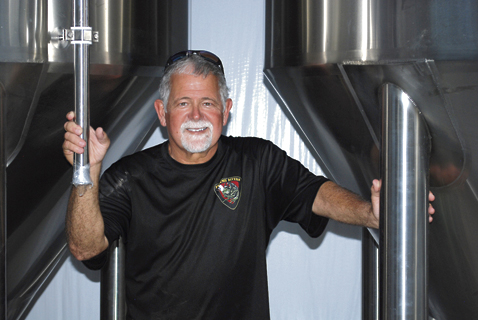 OMAHA — Omaha Brewing Co. (OBC) has taken delivery of a 30-barrel (BBL), four-vessel Craftwerks brewhouse. After nearly a year of planning and construction, the equipment is being installed in the new 6,000-sq.-ft. building constructed this year to house it.
The new building complements the original 14,000-sq.-ft. building that will house the tasting room, barrel aging room, original one-barrel brewhouse and lab.
Surrounding the brewhouse will be 120- and 60-BBL fermenters. A 60- and 120-BBL brite tank and a 7-BBL coolship are also being added to the production line. Brite tanks allow beer to be carbonated at the appropriate temperature and pressure. A coolship is an open fermentation vessel used in beer production.
Departing Lake Orion, Michigan, on  Aug. 25, the brewhouse and cellar traveled 720 miles on 10 flatbed trucks to the Omaha production facility.
“It always takes a lot longer for these kinds of things,” said OBC owner Dr. Robert Lee. “It’s frustrating at times; it’s a lot of fun most of the time, but now that the equipment is here we can really start to shape our brand like we have wanted to from day one.”
Installation of the brew system is underway, including glycol and steam piping. Glycol is food-grade antifreeze used to control the temperature of fermentation and brite tanks. The brewhouse will be run on a fully automated, touch-screen control panel operating on Siemens Braumat technology.
A Wild Goose canning line is set for delivery in late September, with packaging to begin soon after. OBC’s core brands, Nada-Baanana Weiss Beer, Oma-Hop Session Ale and Hannahatchee Creek IPA, will be the first brands packaged in cans. Information on retail outlets will be released soon.
Omaha is located just south of Columbus, on the Alabama line where Lee grew up with his four brothers and two sisters. The original building housing the brewery was built in the late 1940s as a school and renovated in the 1990s as an industrial plant manufacturing miscellaneous parts. When Lee bought the building in early 2013, renovations began and continue today.
— Submitted by Chip Jones