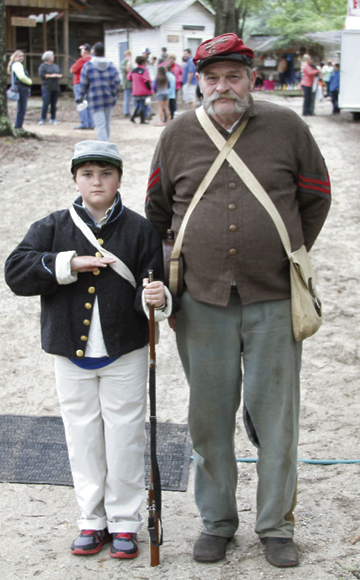 ANDERSONVILLE — The Andersonville Guild’s tireless preparations for this year’s Andersonville Historic fair came to fruition on Oct. 3-4, as individuals from all over the southeastern United States descended on the small civil war village to celebrate the area’s rich history.
Visitors from all walks of life came to Andersonville last weekend to enjoy a parade, sample the wares of the many food vendors, and take a trip back to a time when the nation was on the brink of being torn asunder by a brutal war.
War reenactors mingled with other visitors, clad in period-accurate garb to accentuate the many historic attractions available to festival goers, including a working blacksmith shop, a variety of antique and collectibles stores, arts and crafts vendors, reproductions of buildings from the 1860s and, of course, the Civil War battle reenactments.
The parade included performances by the Southland Academy Marching Band, a “shootout” in the streets by the Southern Gunslingers, historic automobiles carrying important individuals from Sumter County including state Rep.,Mike Cheokas, R-Americus, Shriners entertaining the crowd with their go-cart antics, and marching soldiers wearing the colors of both the Union and Confederate armies of the civil war.
Attendees at the fair were also treated to a performance by the Georgia Southwestern Jazz ensemble and a live band performing classic rock cover songs.
Moses Simmons, an Americus native, spoke with the Times-Recorder about his first trip to the Andesonville Historic fair, saying, “I have really been enjoying the fair.” Asked what his favorite part was, he said, “I would say the smithy … Pretty much everything else, but mainly the smithy,” referring to the blacksmith conducting demonstrations at the Blacksmith Shop.
Henry Kelley and his grandson, Thomas, spoke with the Times-Recorder as well. They came to the fair from Phenix City, Ala., to participate in the reenactment.
“The Andersonville Fair was my first (reenactment) event 14 years ago,” Kelley said. “I have been back to participate as often as I can since then,” he added. Kelley said that he became interested in reenacting when he was in high school, working on a report about the Battle of Fredericksburg in Virginia.
“I’ve been interested in it ever since,” he stated.
Kelley’s grandson, Thomas, told the Times-Recorder that he has been to several reenactments with his grandfather and that he really enjoys them.
Another interesting fair-goer, Kelly Crocker, told the Times-Recorder that he had come from Tallahassee to participate in Saturday’s parade as a member of the Sons of Confederate Veterans. He said that he had first come to Andersonville in 2009, for 100-year anniversary of the dedication of the Henry Wirz monument and that he is planning to return to Andersonvile in early November as a descendent of Wirz will be visiting the town.
The fair even had visitors from overseas, with John Fox, director of the Georgia Southwestern State University English Language Institute, bringing 10 students from the university’s English as a Second Language program to learn about American history at the event.
All told, it seems that the event was largely successful in its mission of highlighting Andersonville’s historical importance and ensuring that visitors to the event have a great time in spite of overcast skies. 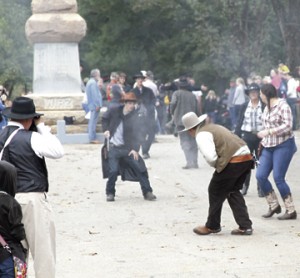 The Southern Gunslingers held ‘shoot-outs’ on the main street of Andersonville at various times throughout the Andersonville Historic Fair.