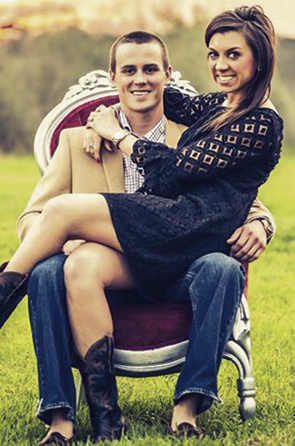 Tony and Sonya Nipper of Alma, and Heath and Diana Browning of Statesboro, announce the engagement of their daughter, Halle Browning of Alma, to Chad Crook of Americus, son of Kevin Crook of Americus and Renee McLendon of Columbus.
The bride-elect is the granddaughter of Mr. and Mrs. Rickey Wooten of Eatonton, Mr. and Mrs. Bruce Durden of Lyons and Mr. and Mrs. James Nipper of Alma.
She is a 2008 graduate of Bacon County High School in Alma, and a 2014 graduate of Georgia Southwestern State University (GSW), Americus with a bachelor of early childhood education. She also attended South Georgia College in Douglas on a softball scholarship. She is a second-grade teacher at L.K. Moss Elementary School in Buena Vista and coaches softball for Marion County Middle School. She is currently working on a master’s degree at GSW.
The future groom is the grandson of Dot Crook of Americus and the late L.E. Crook.
He is a 2009 graduate of Schley County High School, Ellaville and attended South Georgia College on a baseball scholarship. He is a firefighter for Americus Fire & Emergency Services, and is also employed at Parker’s Heating and Air.
The wedding is planned for 5:30 p.m. Oct. 17, 2015, at Bison Valley Lodge, Americus.