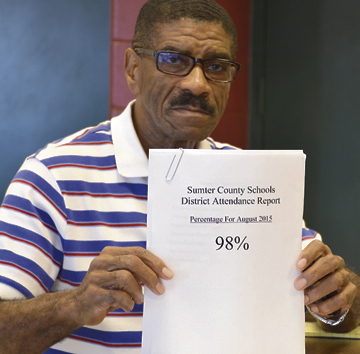 Coach Jimmy Green with his good news for the school system.

AMERICUS — Coach Jimmy Green, as he is known throughout Sumter County, has had his hand in the  development of local youths for 41 years. He was a physical education teacher at Cherokee Elementary School, where he was twice named Teacher of the Year, and then was assistant to the principal at Crossroad Academy, where he was also in charge of physical education.
But it wasn’t until former Superintendent Dennis McMahon pulled him from his planned retirement that he found his latest calling as Sumter County School District Attendance Officer. If a child misses school, he or she doesn’t learn. If he or she misses too much school, their chance to get ahead in life diminishes considerably.
In August, through Green’s efforts, Sumter County achieved a remarkably 98-percent attendance rate. Green does all he can to keep any children from falling through the cracks.
“Parents know now if a child has ten unexcused absences, I will file a warrant and take them to court,” said Green.
Prior to that point, Green will have gone to the home and met with the parents after a child has had five unexcused absences. After six unexcused absences, Green will have set up a hearing with the parents and the school principal to find out what is going on. The 41 years he has spent  helping children in the community aids him considerably as he visits parents he might have once taught in school.
“I have been in Americus all my life,” he said. “Most parents know me and know I’m coming for a reason.”
The message Green has for parents is simple: “You are responsible for getting your child to school,” he said.
If a parent forgets that message for whatever reason, it will just be a matter of time before Green will be there to remind them.

AMERICUS — Local authorities are investigating a shooting incident that occurred at 11 p.m. Wednesday in the area of North... read more