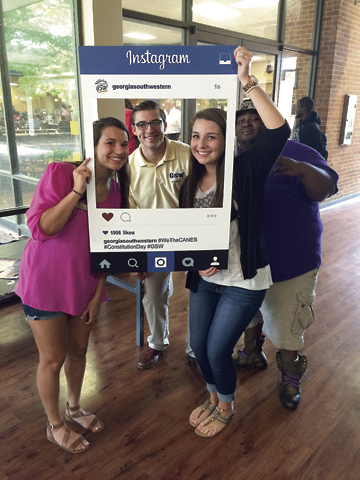 From left, Madi Fultz, Bryce Benton, Kennedy Cann and Brandon Truitt stand for a pic with a ‘WeTheCANES’ Instagram cutout.

AMERICUS — Major national elections don’t take place every year, but National Voter Registration Day does (Sept. 22 this year). Georgia Southwestern State University (GSW) is doing its part by encouraging students to register their names for participation at the ballot box.
Senators from GSW’s Student Government Association and representatives from other student organizations stationed themselves just outside the cafeteria in the Marshall Student Center today leading a voter registration drive. The volunteers helped students navigate the Georgia Secretary of State’s mobile voter registration app.
“It’s important to have a say in where our country is headed,” said SGA Sen. Kennedy Cann of Fayetteville, when emphasizing the importance of being registered to vote. “They now have a voice.”
Student Government senators Madi Fultz and Bryce Benton and Brandon Truitt from the Omega Psi Phi fraternity were also on hand to help students register to vote. Students were also encouraged to document their participation on social media, and an event-specific Instagram cutout was provided for students to use when taking pictures.
According to its official website, National Voter Registration Day was founded in 2012, in response to over six million Americans reporting they didn’t vote due to not being registered. The initiative is led by a diverse, non-partisan group including the Bipartisan Policy Center, the League of Women Voters, Rock the Vote, the Fair Elections Legal Network, the National Association of Secretaries of State and other organizations.
Georgia Southwestern’s participation in National Voter Registration Day was held in partnership with the Sumter County Board of Elections and the GSW SGA and is part of a larger effort promoting “Constitution Week.” In connection, the University held events for POW/MIA Recognition Day, displayed books on the U.S. Constitution in the James Earl Carter Library and sent multiple tweets with facts about the Constitution using the hashtag “#WeTheCANES.”

Twelve successful natives of Americus gave back to their community, awarding a $2500 scholarship. On May 14th at the Americus-Sumter... read more