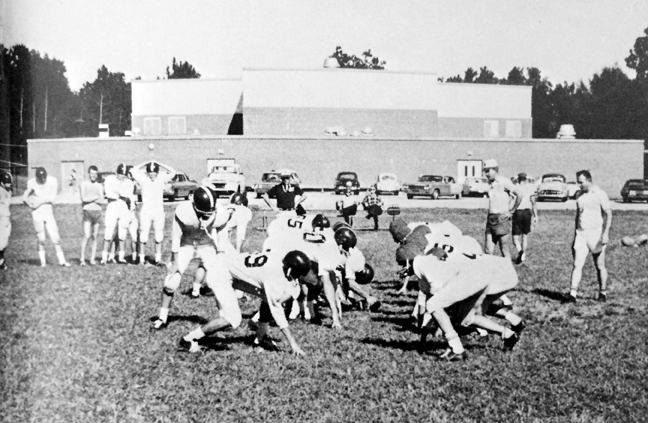 Submitted by Kellette Wade: This uncredited photo, taken from the Americus High School class of 1966 yearbook shows the Panthers practicing on the field behind the high school to prepare for a big game under the watchful eye of the school’s coaching staff.

Editor’s Note: Here at the Americus Times-Recorder, we’re very proud of our area’s rich history of sporting excellence. One of the area’s most celebrated historical periods of athletic prowess was the Americus High School Panthers’ 1965 season, in which the team went undefeated, rolling over opponent after opponent on their way to a sweep of the state championship series.
While delving through our back issues and expansive archives, we have uncovered a wealth of photographs and articles written by former Times-Recorder sports editor, the late Clarence Graddick, during that era.
In last week’s installment of the series, we read about the Panthers’ first contest of the season that did not result in a win. That’s certainly not to say that they lost, however, as the muddy battle led to a 0-0 tie.
In that contest, the Americus crew had faced their most challenging opponent of the season so far, the Fitzgerald Purple Hurricanes, who brought both a talented defensive line and an impressive offense to the field to duke it out with the Panthers. The lingering aftermath of Tropical Storm Debbie, which had left the field in poor shape for gridiron action, affected players on both sides of the ball, dousing each team’s hope of coming out ahead.
After licking their wounds, the Panthers quickly picked themselves and began preparations for the next week’s contest against the Brooks County Tigers.
Unfortunately for the practicing Panther team, the rainy weather would continue for several days, forcing the team, according to Graddick in an October 7, 1965 article, to stay indoors, reviewing defensive plays and assignments. The article went on to describe how the dismal weather had taken its toll on the team in other ways as well, with starters Danny McGowan, Pete Smith, and Mike Fennessy each affected by colds that kept them out of practice that week. Lennie Hicks was another casualty of the weather, as he had sprained his ankle in the sloppy playing conditions of the previous week.
Graddick went on to say that preparations for the next week’s contest would not be easy for the Panthers because the Tigers used multiple offensive formations and, therefore, their strategies would likely be difficult to predict. “The Tigers are adept at running and passing from the single wing, un-balanced line, which is a formation that the Americus defense has not faced this season,” he wrote.
As Friday approached, the stormy weather eventually subsided and the team’s ailing members began to feel better in time to return to the field. When game time came to pass, the Panthers were ready.
In the Oct. 1, 1965 issue of the Times-Recorder, among advertisements for newly released NBC sitcom, “I Dream of Jeannie”, an article about a Viet Cong ambush on a 20-truck convoy of American infantry during the ongoing conflict in Vietnam, and a classified section advertising brand new 1965 GMC pickup trucks for the low, low price of $1,799.50, Graddick penned an article on the Panthers’ victory from the previous evening.
A portion of this article is shared below:

ATR File Photos:
This installment of Clarence Graddick’s signature “Sportingly Yours” series from the Oct. 8, 1965 edition of the Americus Times-Recorder gave local football fans a preview of what they might expect in the Panthers’ upcoming match against Brooks County.

QUITMAN, Ga. – The Americus High Panthers finally decided the Brooks County Tigers were for clawing here Friday night in a Region 1-A West contest and in 13 minutes and 34 seconds  of playing time ran up a 35-0 lead of the outmanned Tigers and turned the rest of the game over to the subs.
The Tigers showed early that they came to play when the vaunted Panther defense appeared asleep or unaware that a Tiger could likewise claw. The Brooks County team got a good kickoff return and two quick first downs. The drive carried to the Americus 31 before Bill Booth fumbled and David Ragsdale recovered for Americus at that point.
CHAMBLISS MAKES MOVES
The Panthers managed a first down and almost another but Buck Shiver fumbled and Jim Taylor claimed the ball for Brooks. James Jones moved the ball for the Tigers for two more first downs and to the Americus 30 but Bill Chambliss picked off a second-down pass to halt the drive at the 26 and the Tiger offense died for the night.
Chambliss woke the Panthers and the fans on the next play from scrimmage as he returned right end and traveled 74 yards for an apparent touchdown. Clipping moved the ball back to the Americus 42 and four plays later Shiver went off right tackle for 16 yards and a score that counted. David Reeves kicked his first of six straight extra points of the night with 1:21 left in the first period.
REEVES TOSSES
Reeves accounted for three more touchdowns in the second quarter as he threw three passes and completed all three for touchdowns. The first was a 10-yarder to Mike Fennessy. In less than a minute, Gary Reeves, a cousin, took a long heave over his shoulder for another score of 43 yards in length. Gary also got the next one with 2:19 left in the half. This one was good for 74 yards.
Harold Horne made the last touchdown for the starters, an 88-yard kickoff return as the second half opened. The starters then left the field with only 13 seconds gone in the final half.
RESERVES SCORE
Jimmy Lunsford, a southpaw reserve quarterback, chalked up the final six-pointer for the Panthers as he hit Ronald Folsom with a 21-yard pass for the score. As Reeves kicked his final point of the night for the 42-0 lead, only 3:07 remained on the clock.
The Americus defense showed no mercy whether it was the first or second string or the deep reserves in limiting Brooks to only 31 yards on the ground and 75 in the air. Meanwhile keeping the Panther goal from being crossed in the six games to date and the offense ran its total points for the season to 155.
—————————————
The Panthers fared much better in the yardage department, rushing for 276 yards and connecting on five passes that netted the team an additional 170 yards. Americus’ powerful defenders managed to pull down five interceptions in the game and recovered three fumbles. The Panthers also gained 16 first downs in the match.
The Panthers’ defensive coordinator, Melvin Kinslow, recently sat down with the Times-Recorder to discuss the team’s epic season.
With the team’s strong defense making it so far into the season without giving up a single point, Kinslow was asked what sort of things he would have the team’s defenders do to prepare for a big game. “We weren’t specifically trying to not give up any points,” he said. “We were just worried about winning the game. That’s what we wanted to do… All I was concerned about was whether or not we had one more point than the other team did when the game was over.”
Kinslow went on to elaborate on one of the keys to the team’s success, saying, “In practice, we would run the other team’s offense against our defense. From there, we could see where the weaknesses might be and we would adjust to the other team’s style of playing. Of course, one of the main things was that we didn’t play one set defense. We tried to keep their offensive linemen guessing. We may be in a five front for a couple of downs. Then we may go to a six-man front. Then, sometimes, we’d go to a seven-man front. We wanted to keep those offensive linemen guessing where the defense was going to be. I think that. contributed to our success. We never did play just a set number each time like a lot of teams do now. They’ll just play a four-man front and they’ll just stay in it. I never did think that was a good idea.”
—————————————
With yet another blowout win under their belts, the Panthers dutifully began preparing for the team’s next test against the Cook County Hornets. Be sure to visit us next week as we continue to explore the Panthers’ epic 1965 season, with the details of f yet another impressive victory over the Cook County Hornets and more excerpts from our interviews with members of the Panthers’ incredible 1965 team.