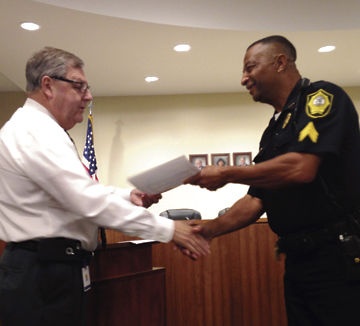 AMERICUS — On Sept. 23, Americus City Manager, Steve Kennedy and Human Resources Director, Dee Jones held programs with each department of the City to recognize employees who excelled at being dedicated in the areas of perfect attendance, safe driving and years of service. Employees in each category received a certificate, keychain, date seal or gift card depending on the number of years accomplished.
Among the 32 employees awarded for perfect attendance were Police Sgt.  Eddie Davis with 17 years and Fire Capt. Linwood Blake with 18 years of perfect attendance.
In the arena of safe driving there were a total of 89 employees awarded for traveling safely in the performance of their job duties, including not being found at fault in an accident. Six of the 85 awarded had an astounding 21-year record: Sgt. Terrell Coley, Lt. Tim Green, Maj. Herman Lamar, Lt. Mark McCardle, Maj. Richard McCorkle, Sgt. Helen Sims and George Young.
The final category was in recognition of years of service. Employees are awarded in five-year increments of uninterrupted service to the City, and included the awarding of a total of 24 employees, with Police Sgt. Terrell Coley topping the category at 30 dedicated years.
Although this is the first year the program has been held under the leadership of the new city manager, Kennedy said that “being present to perform the job is high on his list of priorities, and so is showing appreciation to those who do.”
The recognition ceremonies are held annually in September and all employees are urged to attend.