AMERICUS — Kathleen Jordan, daughter of the late Hamilton Jordan, has edited a book written by her father and published by the University of Georgia Press.
A Boy from Georgia: Coming of Age in the Segregated South, includes a foreword by President Jimmy Carter, for whom Hamilton Jordan served as his chief of staff in the Carter White House.
Daughter Kathleen, a television producer and writer living in Los Angeles, says, “My dad had been working on this book for a few years, and it was not finished when he died (in 2008). He left my brothers, my mom and me with this manuscript, to which we have made as few edits as possible in an effort to preserve the integrity of the work. At the time of his death, he did not know that we would go on to finish this book; we didn’t either. It would make him happy to know that you’re reading it.”
According to promotional material from the UGA Press, the book “chronicles Hamilton Jordan’s childhood in Albany, Georgia, charting his moral and intellectual development as he gradually discovers the complicated legacies of racism, religious intolerance, and southern politics, and affords his readers an intimate view of the state’s wheelers and dealers.
“ … his middle-class childhood was bucolic in some ways and traumatizing in others. As Georgia politicians battled civil rights leaders, a young Hamilton straddled the uncomfortable line between the southern establishment to which he belonged and the movement in which he believed. Fortunate enough to grow up in a family that had considerable political clout within Georgia, Jordan went into politics to put his ideals to work. Eventually he became a key aide to Jimmy Carter and was the architect of Carter’s stunning victory in the presidential campaign of 1976; Jordan later served as Carter’s chief of staff. Clear eyed about the triumphs and tragedies of Jordan’s beloved home state and region, A Boy from Georgia tells the story of a remarkable life in a voice that is witty, vivid, and honest.”
Jordan was key advisor and strategist for Carter’s successful presidential campaign in 1976, and, at age 26, Jordan designed and spearheaded Carter’s successful gubernatorial campaign in 1970.
Jimmy Carter writes in his foreword: “I have often said that no other human being has affected my career more profoundly nor more beneficially than Hamilton Jordan. … This book is not about the years he spent working for me but rather about the years that led him to me. Written in Hamilton’s clear prose and nurtured into publication by his children after Hamilton’s death in 2008, this memoir traces his evolution from childhood to the time just before we met. Much is known about Hamilton as the architect of my presidential campaign and chief of staff. This book shows the foundation of his ability and the journey of his development into the bright, committed young man who changed my life forever.”
Andrew Young, former Georgia congressman and U.S. ambassador to the United Nations, said of Jordan, “Hamilton Jordan was a whip-smart advisor, a great writer, and someone with whom I shared a warm and candid friendship. He witnessed the formation of the civil rights agenda in real time and made it a personal mission to break down racial barriers in hiring staff in the governor’s office and the White House. Hamilton’s reflections on his southern heritage are honest, witty, and as important now as ever before.”
Hank Klibanoff, coauthor of The Race Beat: The Press, the Civil Rights Struggle, and the Awakening of a Nation, writes of Jordan’s book, “This is a delightful and inspiring coming-of-age story brimming with funny anecdotes, family mysteries, and political intrigue, but it is much more than one raconteur’s personal report of how the scales fell from his eyes. Through Hamilton’s stories of his maturation, it is possible, finally, to trace the evolution of a species — the white, southern male — from the muck of Jim Crowism to the embrace of the progressive spirit that is the South’s salvation.”
Kathleen Jordan has two book signing dates in Albany next week: From 3-7 p.m. Oct. 22, she will be at the Albany Museum of Art, 311 Meadowlark Drive; and from 11:30 a.m.-1:30 p.m. Oct. 23, she will be at the Albany Civil Rights Museum, 326 Whitney Ave. This event features a reading at noon, followed by a Q&A, book signing and light lunch provided. 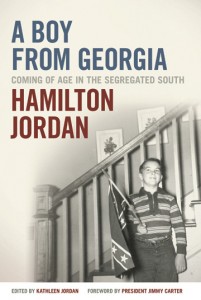 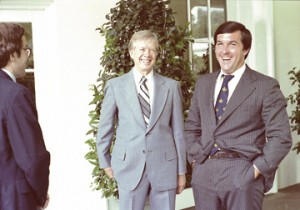 Hamilton Jordan, at right, with President Jimmy Carter at the White House.