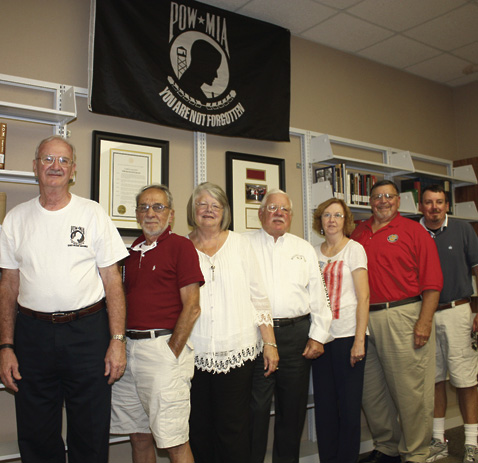 AMERICUS  — Just before participants of “The Ride Home 2015” motorcade made their annual grand entrance onto the Georgia Southwestern State University (GSW) campus on Friday, Sept. 18, four former prisoners of war and some of their family members made a special visit to GSW’s James Earl Carter Library, specifically, to its POW Collection.
Located downstairs in the southeast corner of the building, the POW Collection includes approximately 400 books detailing accounts from every major U.S. conflict. One of the books “The Longest Rescue,” written by GSW history Professor Glenn Robins, chronicles the time Bill Robinson spent as a POW in Vietnam.
The POW Collection can be visited whenever the James Earl Carter Library is open, which is seven days a week. Check www.gsw.edu for library hours.