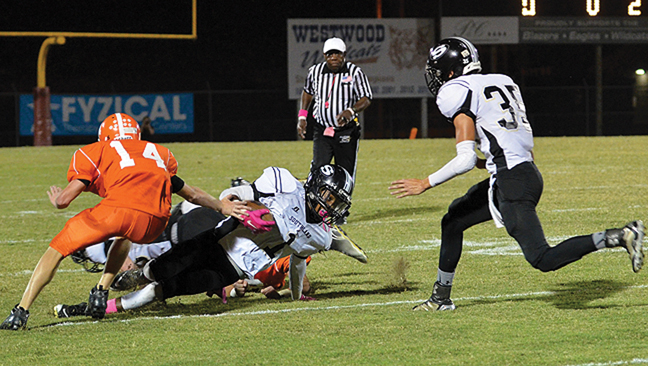 Photo by Dawn Shattles: A Westwood defender drags down Southland's Jamaal Rice near the goal line during the teams' Oct. 16 Camilla match.

CAMILLA – The Southland Academy Raiders traveled to Camila on Oct. 23 to face off against the Westwood Wildcats. The Raiders had a great night on the gridiron bringing home a substantial 35-13 victory over the Wildcats, improving the team’s overall record to 2-6.
Southland took an early lead in the contest, scoring a pair of touchdowns in the first quarter. The first came after a six-play, 71-yard drive that culminated in a six-yard pass from quarterback, Alex Roach that found running back, Jamaal Rice, in the end zone three minutes into the action. Rice struck again two minutes later, speeding by the Wildcats’ defenders on a 67-yard jaunt that landed him in the end zone once more.
The Raiders’ played tough defense to prevent the Wildcats from crossing the line in the first frame..
The Raiders added another seven in the second frame, with a 90-yard kickoff return by Rice that added another sixpoints to go with another well-aimed PAT kick. Westwood stepped up their game in the second frame, adding two touchdowns and a PAT to narrow the Raiders’ advantage to 21-13.
Southland added another seven points in both the third and final stanzas, to expand their lead to 35-13 before the final buzzer. The first was achieved on a seven-yard run by Stephen Turton that capped off a three-play, 26-yard drive. The team’s final score came on another long Rice run, as he sped 72 yards into the end zone in the final stanza.
The Raiders gained 345 rushing yards, coupled with 37 through the air on three completions in the match for a total of 382 all-purpose yards. Southland’s defensive skills held the Wildcats to only 201 total yards in the match.
Rice paced the Raiders’ offense on the ground, contributing 162 yards on seven carries, followed closely by Turton, who added 142 yards on 19 totes.
Josh McKie and Josiah Copland each contributes receptions to the victory as well.
The Raiders return to action on Oct. 23 in Americus, facing the Tiftarea Panthers at Harvey Simpson Stadium. The following week, the Raiders will wrap up the regular season with another home test against the Memorial Day Blue Thunder. 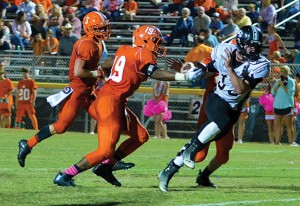 Stephen Turton speeds past a trio of Westwood defenders in during the Raiders’ Oct. 16 contest against the Wildcats in Camilla.