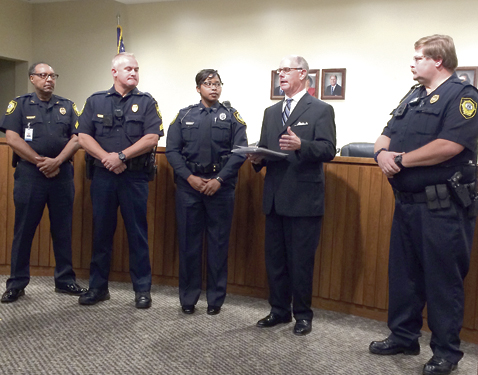 AMERICUS — Americus Mayor Barry Blount had the pleasure of swearing in two new officers with the Americus Police Department and commending another officer for exemplary conduct at the monthly meeting of the Americus Mayor and City Council Thursday.
Americus Police Officer Jessica Monts was presented a commendation for her handling of a situation on Sept. 9 on Earl Street. The officer responded to a domestic disturbance and found a man who was attempting suicide by hanging himself from a tree. According to information provided by Lt. Tim Green, Monts rushed to the man’s aid, remaining calm in a “high-pressure situation” and hoisted the man’s body in the air while maintaining radio contact with emergency responders and also directing bystanders in assisting to remove the man from the tree.
“Her quick thinking quite possibly saved the life of a citizen in distress.”
Mayor Barry Blount administered the oath of office to Christopher Halstead and Nicholas Smarr to become officers with the Americus Police Department. He also swore in Charles Christmas who has been appointed to the Historic Preservation Commission.
The mayor recognized Honorary Council member Demetria Kearse-Brown and also presented a proclamation in recognition of National Disability Employment Awareness.
The Council will took the following actions.
• Voted to suspend the rules and adopted a Fee Ordinance Amendment doubling the alcohol licensing fees as follows: wine wholesale from $500 to $1,000; wind retail from $300 to $600; beer wholesale from $300 to $600, and beer retail from $250 to $500.
• Approved a payment of $16,690.73 for invoices from 2015 from the Sumter County Board of Commissioners.
• Authorized the write-down of 2008 property taxes in the amount of $4,593.73.
• Approved a new alcohol beverage license for Little Brothers Bistro, 133 W. Lamar St.
• Adopted a resolution accepting a utility line easement from BMK Properties, LLC in connection with serving St. John’s Anglican Church of Georgia Inc. for city utility services and other services.
• Approved the Downtown Development Authority to expend up to $26,800 to replace the exterior lights on the Windsor Hotel. The total cost is $46,800 with the remaining $20,000 coming from private funds.
• Approved paying Sharlene Cannon $4,000 per month for two  months to perform an assessment of the Downtown Main Street and Tourism initiatives.
• Approved spending $25,000 on improvements at the East Church Street Train Depot, to come from TSPLOST revenues.
• Approved the Americus Gas Department staff to assist the City of Andersonville with the installation of natural gas mains. The gas department will be reimbursed for labor and equipment usage.
• Approved the appointment of George Laurin to the Board of Zoning Appeals to fill the term of Jim Norris, who has resigned.