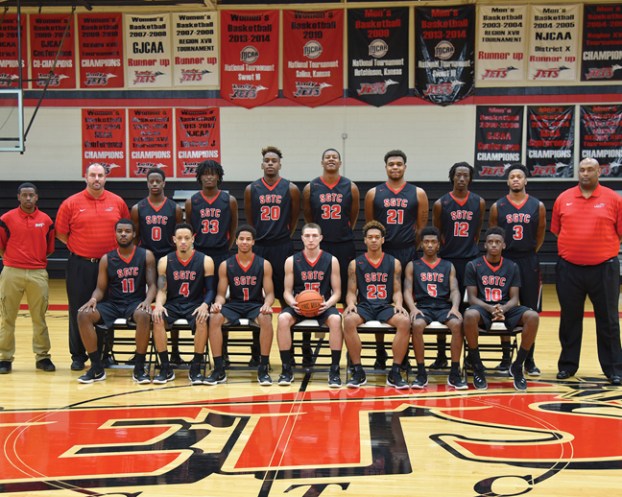 AMERICUS – The South Georgia Technical College (SGTC) Jets intercollegiate basketball team will kick off the 2015-16 season with a new head coach and a completely new squad filled with five sophomores, six freshmen and three red shirted players. The regular season begins Oct. 30,  when the Jets travel to Pensacola, FL to participate in the Pensacola Junior College classic with games against Pensacola and Gulf Coast College.
Travis Garrett, former assistant men’s basketball coach for NCAA Division I South Carolina State University in Orangeburg, S.C., was named as the Jets new men’s head basketball coach in May and has secured an impressive squad of young men in just five months.
“This will be a very exciting year in the NJCAA Region XVII,” said Garrett. “Even though this is my first year at South Georgia Tech, I am very familiar with some of the coaches in this region, so I look forward to the challenges ahead. I am excited about leading this group of young men and I hope we have the opportunity to be playing late in March.”
Garrett has served as the head coach at USC-Salkehatchie and Clinton Junior College in Division I in the National Junior College Athletic Association (NJCAA) area as well as an assistant coach at Chipola College in Marianna, FL, Northeastern University at Boston, MA, and Bethune Cookman University in Daytona Beach, FL.  He has also been to the national championship tournament with USC Indians.
Garrett has recruited five sophomores for the upcoming season. Corbyn Jackson, a 6’7” forward from Goochland, VA, and Amir Warnock, a 6’9” forward from Suwanee, GA, are both transfers from Central Florida Junior College. Jackson averaged 6.3 points and 4.4 rebounds as a freshman. Warnock averaged 4.8 points and 4.4 rebounds.
Demario Beck is a 6’8” sophomore transfer from Gulf Coast Community College. He averaged 8.2 points, 5.6 rebounds last season. He also shot shot 51 percent from the field and 36 percent from the three point line.   Jamal Norman, a 6’4” guard from Savannah played at Savannah State. He had 4.2 points 2.8 rebounds and played 18 minutes a game as a freshman.
Clarence Smith is a 6’2” sophomore guard from Valdosta. He is a transfer from Winston Salem State. He averaged 25 points per game at Valdosta High School as a senior.
The freshman class features three players to watch including Jalen Mitchell, a 6’5” forward from , Matt McMorris, a 6’1” guard from Buford, and Chikh “Shaq” Athie, a 6’4” guard from Cincinnati, OH. Other freshmen include Rico Simmons, a 5’9” guard from Gordon, GA,  Pat Welch, a 6’0” from Manchester, NH, and Derrick Trawick, 6’1” from Macon, who played at Wilkerson County High School.
The three red shirt freshmen are all guards. They include: Keyshawn Baker, 6’3” from Columbus, Isisah Channer, a 6’3” from Tampa, FL, and Carlos Eason, a 6’6” forward from Lyons, GA.
The Jets were 23-11 last season and finished in the semi-final round of the NJCAA Region XVII tournament.  Garrett is only the fourth head coach in the history of the South Georgia Technical College Jets basketball program which was reinstated in 2001. Coach Chris Wade took the reins of the program in 2001 and remained with the program through the 2005-06 season. Former assistant coach, Steven Wright, was named head coach when Wade resigned in 2006. He served as head coach for eight seasons and had been with the program since its inception. He stepped down to accept a ministerial position at a local church and was followed by Douglas Byrd, who worked as an assistant coach under Wright for two and a half seasons before being named to the head coach position in 2014-15.
Garrett has a Bachelor of Arts degree in Sports Management from Stetson University in Deland, FL and worked in the Sports Information Office at Stetson. He also has an Associate of Arts degree from the College of Central Florida in Ocala, FL.