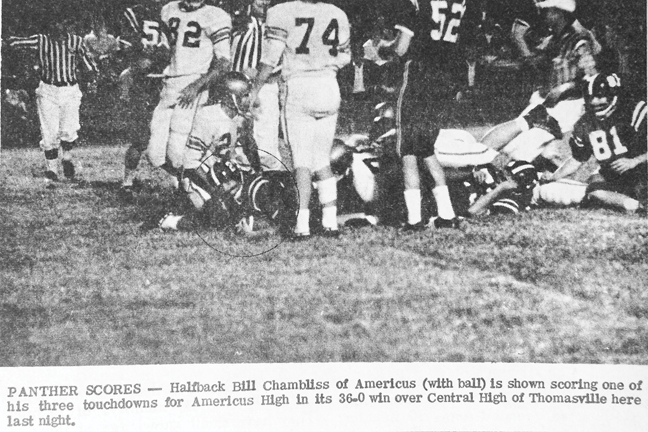 ATR File Photo: This photo was included in the Oct. 23, 1965 edition of the Americus Times-Recorder. The original caption reads, “PANTHER SCORES - Halfback, Bill Chambliss of Americus (with ball) is shown scoring one of his three touchdowns for Americus High in its 36-0 win over Central High of Thomasville here last night.” 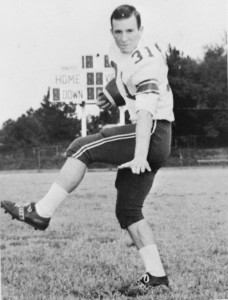 Editor’s Note: Here at the Americus Times-Recorder, we’re very proud of our area’s rich history of sporting excellence. One of the area’s most celebrated historical periods of athletic prowess was the Americus High School Panthers’ 1965 season, in which the team went undefeated, rolling over opponent after opponent on their way to a sweep of the state championship series.
While delving through our back issues and expansive archives, we have uncovered a wealth of photographs and articles written by former Times-Recorder sports editor, the late Clarence Graddick, during that era.
In last week’s installment of the series, we read about the Panthers’ seventh shutout of the season over Cook County, which turned out to be one of the toughest of Americus’ contests of the regular season. True to their form, the Panthers refused to give up and fought tooth and nail for the full 48 minutes to bring home a 13-0 win. The team then set their sights on the defending region champions, the Thomas County Central Yellow Jackets, who were scheduled to head to Americus the following week.
In the Oct. 22, 1965 edition of the Americus times-Recorder, Graddick published, in his weekly “Sportingly Yours” installment, his preview of the upcoming homecoming clash against the Yellow Jackets. In the column, Grad 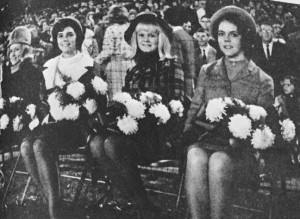 ATR File Photo:
Members of the Americus High School class of 1966 Homecoming Court watched the action from the sidelines as the Panthers did battle with the Central High Yellow Jackets.

dick wrote, “The defending champions of Region 1-A West come to town tonight and will be out to grab that last straw between them and a repeat performance… A win over the Americus High Panthers and they hope for a three-way tie for the sub-region crown.
“The would probably be tough enough even without the element of a title in the picture but from all reports from Thomasville the Yellow Jackets will be here with everything they have and are keyed up to the highest pitch. Central had its first taste of victory over Americus last year and liked it well enough to take a return helping if possible.
“Central missed the sure road last week in losing to Mitchell County and many times a team will come roaring back from a game they lost like a wounded tiger and we feel this is the way the [Jackets] will be. They probably will be able to do some stinging if this is the case.
NO LET DOWN FOR THE PANTHERS
“There can be no let down on the part of the Panthers if they want to win the sub-region title and continue on in the playoffs. If they win this one against Central tonight there will be another tough game in front of them next week against the Mitchell County Panthers and even with a 3-0 record (if they beat Central) the Camilla Panthers would have to be licked because they have a 2-0 record in sub-region play with only Brooks County to play after the Americus game.
Then again the Panthers will have to take things the way they are an play each game as it comes up. This way they won’t be looking ahead and get hit in the present. A let-down by the Panthers at this stage of the game would be disastrous.
All year the boys have played ball like they wanted to go all the way. They let actions speak louder than words and we believe they will continue in the usual manner tonight and climax the Homecoming Ceremonies with a convincing win over the Jackets. Also, we do not think the Panthers will have their goal crossed by the Jackets.”
A convincing win it would turn out to be, as the Panthers would hit the gridiron that very night and push towards a 36-0 win against the Yellow Jackets, marking the team’s seventh shutout of the season, not counting the 0-0 tie against Fitzgerald.
The next morning, the Oct. 23, 1965 edition of the Times-Recorder contained an article about the groundbreaking ceremony for a soon-to-be erected new building that would accommodate Americus’ First Methodist Church’s growing congregation. The paper also covered the previous evening’s Homecoming festivities, and included an interesting article on the resignation tendered by the president of Georgia Southwestern, Dr. Lloyd Moll, after being repeatedly harassed following his encouragement of the formation of a biracial committee to promote civil rights in the community.
Of course, the edition also included an in-depth account of the Panthers’ victory of the previous night, penned by Graddick, and titled, “Panthers Continue Win Streak With 36-0 Victory”.
A portion of this article is shared below:
—————————————————-
Panthers Continue Win Streak With 36-0 Victory: Chambliss Scores 3 TDs As Jackets Lose Stinger