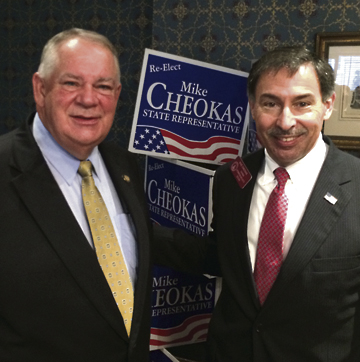 Speaker of the Georgia House of Representives David Ralston, R-Blue Ridge, at left, with state Rep. Mike Cheokas, R-Americus, at a fundraiser for Cheokas Tuesday morning at the Windsor Hotel.

Speaker of the State House visits Americus for Cheokas

AMERICUS — The Speaker of the Georgia House of Representatives,  David Ralston, R-Blue Ridge, came to Americus for a fundraiser breakfast for state Rep. Mike Cheokas, R-Americus, Tuesday morning at the Best Western Windsor Hotel.
Following the event, Ralston met with local media.
Ralston is really bullish on Cheokas in his position as chairman of the Information and Audits Committee in the House.
“He is a very important part of the leadership team,” Ralston said of Cheokas. “He is someone I go to on the tough issues. He is a valuable and important member of the House of Representatives and he is doing things to make this community better.”
Ralston was asked what the big issues will be at the next General Assembly session in January 2016.
“Of course, balancing the state budget,” he said, adding that they have cut spending and will find other ways to ensure a balanced budget if necessary. He mentioned that Georgia is one of eight states that has a Triple A bond rating, which speaks highly of the state and its leadership.
“Jobs, of course,” he said of what’s upcoming. “Economic development and job creation are most important to me. That’s all of the state, not just Atlanta. The climate is favorable in every community in the state. Through tax policy and regulatory policy, we’ve made Georgia a competitive state for business. Georgia’s the most competitive state in the U.S. for doing business.”
Ralston was also asked to comment in education initiatives.
“We’ve been able to restore some cuts in education and to give a pay raise to teachers,” he said.
He said that Governor Deal’s Opportunity School District proposal is designed to “lift up systems that are in trouble … schools that are consistently failing their students.”
The speaker was also asked to talk about the OneGeorgia initiative and how can it work. He said there’s not just one thing to do.
“Transportation is important here, then there’s water, education,” he said, adding that Columbus is experiencing more growth as well as parts of metro Atlanta and inside 285. He also expects to see a boom in growth in the Savannah region as the port deepening project gets underway next month.