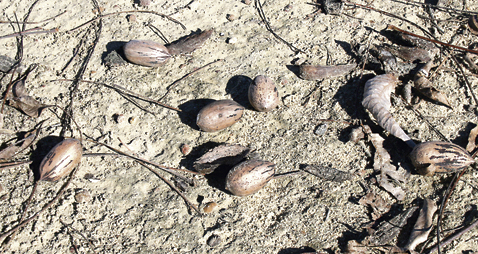 There will be between 110 and 120 million pounds of pecans harvested this season, University of Georgia Cooperative Extension pecan specialist Lenny Wells estimates, making this year’s Georgia pecan crop the best he’s seen in the last three years.
“In 2013, it was a really wet year,” Wells said. “When we have a really wet year, pecan scab disease is really bad and that puts a lot of stress on the tree. Whatever happens to a tree one year affects it the next year, and sometimes for the next couple of years. This year, the trees seemed to have recovered from that.”
One reason Wells is optimistic about the crop is the limited pecan scab disease pressure Georgia farmers faced following the wet spring. This limited pressure allowed most growers to protect the nuts at peak time of need, from June through August.
Pecan scab is a fungal disease that infects the leaves or the nuts of pecans. If the disease infects the nut early, scab can cause the nut to turn completely black and fall off. Scab is common throughout the state, but is most severe in the areas of southwest and southeast Georgia, such as Albany and Waycross, where pecan production is high. However, many growers have been able to manage the disease this year, according to Wells.
“You’ll see black spots begin to develop on the tissue, and it thrives in humid conditions,” Wells said. “The more rain we get, the more disease we have. Growers have to spray fungicides to protect from that disease on most of our commercial varieties. There are some varieties that have pretty good resistance, but most growers end up having to use a fungicide.”
According to Wells, the current prices for pecans are pretty good, especially for Desirable, Sumner and Cape Fear varieties. Contracts for these varieties are averaging $2.70 per pound. Stuart, another popular variety in Georgia, has been contracting around $2.20 to $2.25 per pound in the shell.
Historically, Stuart was Georgia’s most popular variety, as there are more Stuart trees in the state than in any other. However, the Desirable variety, due to its large nut size and consistent production, has become one of the top-grown varieties in Georgia. Desirable is highly susceptible to scab, according to Wells, and many growers are shifting away from it to better manage the disease.
“Last year (2014) was the first time in many years that we saw a shift in which the Desirable variety fell from being the top variety planted,” Wells said. “When Desirable was first released as a variety, it was fairly scab resistant. With any variety there’s a level of scab susceptibility, and the more that variety is planted over a wide area, the better the fungus can adapt to overcome the resistance mechanisms in that variety and it becomes more susceptible.”