Malawian artist to ‘create community of the arts’ at GSW, in local area Nov. 2-5 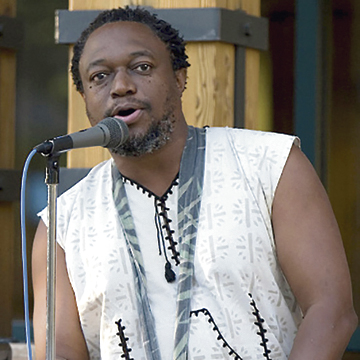 AMERICUS— Georgia Southwestern State University (GSW) welcomes teaching artist Masankho Banda to Americus Nov. 2-5  for a residency entitled “Creating Community through the Arts and Culture” as part of GSW’s “Windows to the World” global learning initiative.
Banda was born and currently lives in Malawi, in southern Africa, after studying and working in the U.S. for 25 years. He came to the U.S. in 1987, where he earned a bachelor of arts degree in theater and dance arts from the College of Wooster in Ohio.
Since that time, he has devoted his life to using dance, theater, music, drumming and storytelling to inspire people of all ages to work together to bring about peace, social justice and cultural understanding.
Banda will give performance presentations, lead drum and music workshops and teach students on both the GSW campus and in the Americus-Sumter County schools, culminating in a community-wide event at 7 p.m. Nov. 5 at the Americus Center for the Arts.
Several programs are open to all members of the local community as well as students. All events are free.
Currently, Banda is on the board of directors of Pathways to Peace, an international peace building organization. He is a member of the National Association of Black Storytellers and a member of the National Storytelling Network as well. He is also an International Certified Interplay Leader.
He has performed his stories and led workshops in the U.S. (in all 50 States), Australia, Mexico, Malawi, Italy, Croatia, Sierra Leone, Morocco, Germany and Brazil, just to name a few.
In 1997, Banda founded UCanDanc’ African Healing Arts to bring his passion for dance and storytelling to communities around the world. He works tirelessly to establish a worldwide legacy of peace messengers.
For his work around the world and all over the United States, Banda was awarded the “Unsung Hero of Compassion” commendation by His Holiness the Dalai Lama in May 2001.
In addition to his bachelor’s degree, Masankho holds a master’s degree in culture and spirituality from the Sophia Center of Holy Names University in Oakland, Calif.
Masankho Banda’s residency is co-sponsored by Sumter County Schools, the Americus-Sumter Arts Council, Georgia Southwestern and individual donors.
For more information, contact the GSW’s Office of International Programs at 229-931-4627 or windows2world@gsw.edu.