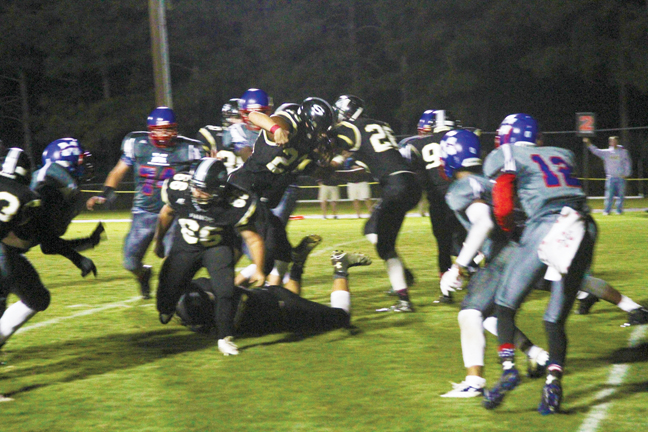 Michael Murray/Americus Times-Recorder: Southland’s Parker Weldon leaps over a Memorial Day defender to push the ball to within inches of the goal line during the second quarter of the Oct. 30 match in Americus.

By MICHAEL MURRAY
and RONALD FORDHAM

AMERICUS – Fresh off of a pair of well-earned wins over the Westwood Wildcats and the Tiftarea Panthers, the Southland Raiders hit the gridiron at Harvey Simpson Stadium in Americus for the final test of the regular season on Oct. 30, taking on the Memorial Day Blue Thunder of Savannah.
The Blue Thunder brought 11 seniors to the field in Americus to lend their experience to the game. This experience came in handy for the visitors, as they returned home with a 46-20 win after the match.
With the two opposing sides having only met once in recent memory during the 2014 season, both teams took the field cautiously, making sure not to underestimate their relatively new opponents.
The action soon picked up, however, as Southland’s players quickly made it clear that they had neither forgotten nor forgiven their opponents for last years’ significant defeat. The two teams spent the first period fighting fiercely as they traded drives throughout the first 12 minutes of play.
The Raiders saw their first chance to strike after a long drive left the team looking at third down, inches from the goal line three minutes into the second frame. The nine-play drive had been propelled by a pair of completions by quarterback, Alex Roach that found Stephen Turton and Parker Weldon, as well as several hard runs by these same two players. With mere inches between the ball and the goal line, Turton took another handoff and barreled up the gut for the game’s first score. Raider place kicker, Stephen Barnes deftly split the uprights to put the Raiders ahead 7-8 with 8:55 left in the half.
This fired up the Memorial Day up crew, however, as the team responded with a hard drive of their own. Despite the defensive efforts of Southland’s Josiah Copland, Stephen Taggart, and Jamaal Rice, who contributed hard stops to slow the Blue Thunders’ progress, Memorial Day broke the plane with around 6:30 remaining before the break.
The Blue Thunder struck again before half-time on long pass play that put them in the Raiders’ red zone. A short run by a Memorial running back then added another six points, which coupled with a successful PAT to put the team ahead 14-7, where they would stay until half-time.
During the half-time break, Southland held the school’s Senior Night ceremonies, honoring the school’s fall-sport athletes that will not be returning next season.
Memorial opened the second half with hard and fast drive that was significantly quickened by a long reception by running back, Irvin Riley. Two plays later, Riley continued to be a thorn in the Raiders’ side with a run into the end zone that spanned about 15 yards. When Memorial’s kicker went for the PAT, a Raider defender got a hand on it and the ball fell short, holding the margin at 20-7.
Southland responded in kind, with Weldon taking the kickoff and tearing his way to the midfield point, dragging defenders about 20 yards of the way. The Raiders steadily pressed on for a five-play march that was aided by an expert run on the part of Townsend Ray and capped off when Rice pulled down a 24-yard pass in the end zone for another sixer. Barnes added another PAT, narrowing the gap to 20-14 with 8:35 left in the third period.
A personal foul on the scoring play was assessed in favor of the Raiders on the following kickoff, where the Raiders were able to kickoff from their opponents’ 45.
Memorial took the ball deep in their own territory and steadily pressed nearly 90 yards to pass the goal, with the aid of long rushes by Riley and Shavari Williams. The visiting team followed with a successful two-point conversion to take a 28-14 lead at the 6:60 mark.
The Raiders immediately brought the ball back to their opponents’ end of the field with a long diving catch by Copland. A flag on the play pushed the Raiders an additional 15 yards, but a strong defensive push from the visitors kept the Raiders from shrinking the gap and Southland was forced to turn over the ball on their opponents’ 16.
The Thunder then bulldozed down the field with even more long rushes by Riley in a drive that was slowed by a couple of sacks by Taggart and Brandon Revell.
The Raiders’ defensive efforts were thwarted, however, when Irwin burst through for another TD. Memorial’s PAT sailed wide, limiting the team’s lead to 20 points with a score of 34-14 and eight minutes left in the game.
On Southland’s four-play return drive, Weldon once again wove his way through a sea of gray uniforms to land at Memorial’s 20. From there, Townsend Ray was able to take a 20-yard trip down the right side for the Raiders’ third TD of the game. Barnes’ kick went wide, leaving the score 34-20 halfway through the final period.
Late in the fourth stanza, two of Southland’s key players, Rice and Copland were sidelined with apparent minor injuries. AS the Raiders got increasingly more banged up, Memorial Day’s offense took advantage of the team’s weathered players to put an additional two touchdowns on the board before the final buzzer, leaving the final score 46-20.
Weldon paced the Raiders’ offense on the ground, contributing 51 rushing yards, followed closely by Ray, who gained 45, and Logan Morris, with 27.
Copland was the main contributor through the air, with 40 yards on three receptions, followed by Rice and Turton, who each caught one for 23 yards. 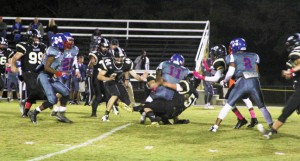