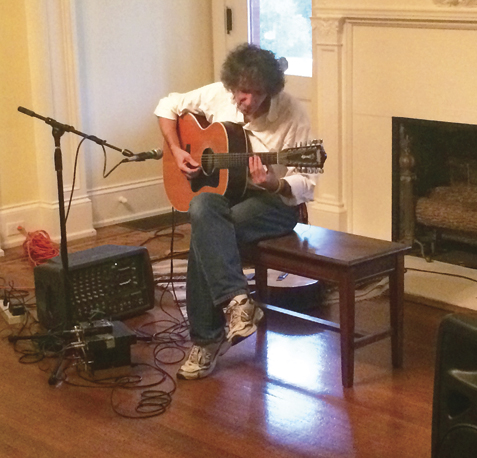 Michael Gulezian performs Sunday at the Lee Council House before an audience of about 40.

AMERICUS — Visitors to the Lee Council House in Americus on Sunday afternoon were treated to a very special musical performance by New Jersey native, Michael Gulezian.
Invited by local guitar craftsman, Todd Lunneborg, Gulezian showcased his musicianship on a trio of guitars that had been handcrafted by Lunneborg. Around 40 Americus locals attended the intimately-set event.
After a brief introduction by Lunneborg, the artist began his performance. Gulezian utilized an intricate finger-picking style of playing, punctuated by percussive slaps and taps on the handcrafted instruments, as well as subtle use of harmonics to deliver a series of uniquely complex compositions. Gulezian’s arrangements showed a range of talent that can only be directly evidenced as a result of a lifelong love of music and years of experimentation.
The set list included tunes that showed the playful side of Gulezian’s musical aesthetic, as his nimble fingers danced across the hardwood fretboards in an aggressive, yet delicate style of playing. Listening to the concert, it was obvious that Gulezian has been influenced by musicians that encompass a variety of genres and backgrounds, ranging from such talented artists as Chet Atkins and Jerry Douglas, to the more contemporary stylings of guitarists such as Jimmy Paige and Jeff Hanna, among many others.
Gulezian’s vocal skills were highlighted at the performance as well, as he offset these upbeat tunes with haunting renditions of the classic Beatles’ “Norwegian Wood”, and the old traditional, “Oh Susannah!”. Through Gulezian’s drawling tenor, listeners were treated to interpretations of the traditionally playful songs, treated in a way that left them feeling more like dirges to love lost. Accompanied by a voice tinged with a delicate balance of hope and sadness, Gulezian’s guitar echoed the ghostly melodies through the halls of the Lee Council House to the delight of the audience.
Listeners at the event were, seemingly, enraptured by the rich, absorbing tones that Gulezian was able to effortlessly coax out of the instruments as he delivered his unique performance.
Between compositions, Gulezian engaged the audience with snippets of his clever wit as he described the inspiration for each of his original tunes.
Gulezian spoke with the Times-Recorder after the performance, describing how the Americus concert came to pass for such an accomplished musician.
“I was out on tour and I knew Todd [Lunneborg] was in Southern Georgia. I was playing in Atlanta and I contacted him and said, ‘Todd, I’m so close by. Let’s do a welcoming party for you at the [guitar] shop … ’ He rented this beautiful, beautiful building and here we are … It’s really been great.”
Gulezian went on to say that he had originally embarked on the tour with four dates booked in Des Moines, Chicago, and Minneapolis. As of the date of the interview, the short tour had expanded to include 25 concerts all across the nation.
“There’s somebody upstairs looking out for me,” he said.
“I started out totally obscure. Nobody really knew what this style of music was,” Gulezian said, on his early days in the music business. “Very few people played finger-style [outside of bluegrass musicians]. To do this really intricate, powerful, right-hand open tuning … now there are a whole lot of people, just brilliant musicians, playing in this style of music. I was kind of ahead of the curve and, now, it’s such a joy to see all these young kids coming up playing this style of music … word is getting out about the style  — about the genre.”
Gulezian credits his upbringing with an ethnomusicologist father and his mother’s penchant for singing Armenian folk songs as an early inspiration for his love of music.
“I grew up with music from all over the world and from all different time periods,” he said. “My dad would bring in music from all these crazy places on Earth. I was listening to that stuff along with rock and Motown and jazz and all this stuff that was on the radio … The Beatles and the Stones and Led Zeppelin … All that stuff got into me and I grew up and I discovered the Delta Blues players … people like Doc Watson … all that intricate, technical guitar stuff from these great, great players … I would learn from them and I’m still learning. I feel like anybody has something that I can learn from if I just sit and listen … Music is just this beautiful, joyful way of bringing people together. It’s a universal language. It’s all just about love … Regardless of what culture you’re from, everybody recognizes music as this beautiful gift. I’m incredibly blessed to be able to do this for a living.”
At this point in the interview, Gulezian noticed one of the audience members admiring Lunneborg’s handiwork, the guitars.
“That’s the Brazilian Rosewood guitar that Todd made me,” he said. “Todd is such an incredible builder. You can see the attention to detail in the neck and the head stock. They sound incredible. Honestly, I wouldn’t be here if it wasn’t for him …”
More information about Gulezian is available at www.timbrelinemusic.com