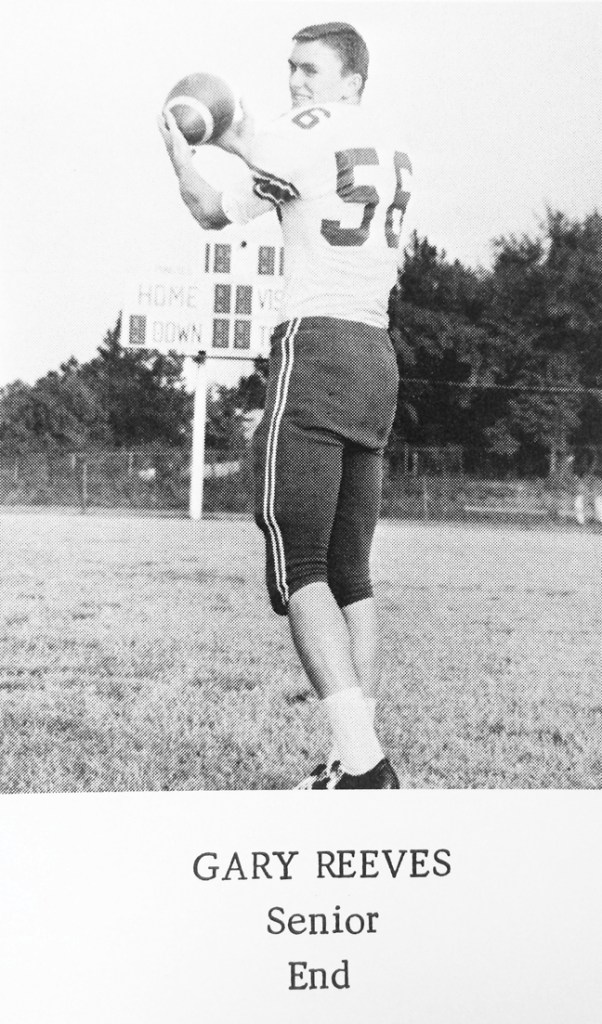 Submitted by Kellette Wade: Gary Reeves poses with a football in the AHS Class of 1966 yearbook. Reeves scored twice in the Panthers’ 1965 match against Mitchell County. 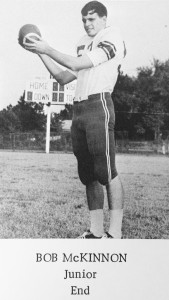 Submitted by Kellette Wade:
Bob McKinnon poses with a football in the AHS Class of 1966 yearbook. McKinnon pulled down a 29-yard pass to score in the Panthers’ 1965 match against Mitchell County.

Editor’s Note: Here at the Americus Times-Recorder, we’re very proud of our area’s rich history of sporting excellence. One of the area’s most celebrated historical periods of athletic prowess was the Americus High School Panthers’ 1965 season, in which the team went undefeated, rolling over opponent after opponent on their way to a sweep of the state championship series.
While delving through our back issues and expansive archives, we have uncovered a wealth of photographs and articles written by former Times-Recorder sports editor, the late Clarence Graddick, during that era.
In last week’s installment of the series, we read about the Panthers’ Homecoming victory over the Central High School Yellow Jackets which marked the team’s eighth consecutive win of the season. This week, we will continue the action with the details of the Panthers’ first test of the year that did not result in a shutout. On Oct. 29, 1965, the Panthers traveled to Camilla to take on the Mitchell County Panthers, who opened the match with a drive that many of the Americus players would later describe as “devastating”. True to their form, the Americus High Panthers pressed forward to grab a blowout win over the Camilla Panthers.
On the morning of the match, Graddick published, in one of his signature series of “Sportingly Yours” columns, a preview of the upcoming action. Here’s what Graddick had to say about the game:
——————————–
Sportingly Yours

PANTHERS WILL WIN
One thing is certain about the championship game between Americus and Mitchell County tonight in Camilla. If there is a winner, the champion of Region 1-A West will be the Panthers.
The winner of the game will cinch the title of the sub-region and ace the winner of the Fitzgerald-Cook County game also being played tonight. The simplicity of the fact that the Panthers will be the champion is both teams have the nickname of Panthers, thus if we do not mention a town we can be sure of a right guess.
SHOULD BE GOOD GAME
The fans who make the trip to Camilla tonight should see one of the better games of the season regardless of who wins. Both teams have strong defenses and both have been able to score enough to support good records for the season. Mitchell has been blanked only twice during the season and both times came on a muddy field. Its loss, 6-0, was played on a rain-soaked field with the rain still coming down. The 0-0 tie with Fitzgerald was also under muddy conditions.
Americus has drawn a blank only one time during the season and this was also on a muddy field. This was a 0-0 tie with Fitzgerald on the ground, and the northern Panthers probably have a better air attack than the southern Panthers from Camilla.
WE’LL QUIT HEDGING
Now, we will stop hedging and get back to the way we feel about the situation. We look for the Americus Panthers to continue the winning streak which began 10 games ago… Not only will Americus win the championship, its 11th game, but will also raise its unscored-on streak of games to nine.
Every one of the fans who travel to the game will be able to see the Americus boys play the strongest team on defense since the Fitzgerald game and this time the contest will be played on a bone dry field.
——————————–
Graddick then went on to discuss his and Alf Bell’s ongoing competition to predict the winners of the area’s region match-ups. Both prognosticators predicted that Americus would claim a solid victory over their Mitchell County adversaries. However, they disagreed on the outcome of the Cook County v. Fitzgerald test.
Further down in the article, Graddick wrote, “Fitzgerald vs Cook County – We look for the Hurricanes of Fitzgerald to blow away the nice Homecoming that the Cook County Hornets have fixed. They will try to make it more than the 13-0 score made by Americus.”
Bell, correctly, predicted that the Hornets would deal an upset to the Hurricanes, however, and that the Americus Panthers would have to battle Cook one more time for the region final.
——————————–
The next morning, the Oct. 30, 1965 edition of the Times-Recorder included an article about a piece of landmark legislation passed by the 89th Congress of the United States that extended voting rights to over 150,000 southern African Americans. The same edition included an article, citing FBI director, J. Edgar Hoover’s, assertion that the continuing civil disobedience associated with the Civil Rights movement and the Vietnam War protests would increase the nation’s crime problems.
The paper’s sports section, however, was dominated by news of the Sumter High School Fighting Tigers having clinched the 2-A sub region title and an in-depth article on the Panthers’ victory of the previous night titled, “AHS takes 1-A West title with 34-6 Mitchell victory.”
A portion of this article is shared here. Due to the manner in which the volumes were bound, some of the articles’ text is not visible. As a result of this, the article is, necessarily, paraphrased.
——————————–
AHS Takes 1-A West Title With 34-6 Mitchell
Victory