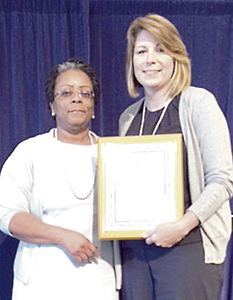 ATLANTA — South Georgia Technical College’s (SGTC) Director of Human Resources, Sandy Larson, was recently presented the Council for State Personnel Administration (CSPA) Excellence in HR Award at the CSPA Annual Conference, held recently at the Loudermilk Center in Atlanta. She was nominated for the award by her supervisor, SGTC Vice President of Administrative Services and Acting President Janice Davis.
Larson has been an employee of SGTC since 2007, when she began as a Financial Aid specialist. In 2010, she was named Human Resources coordinator, and promoted again in 2012, to Human Resources director. She has served on the Technical College System of Georgia (TCSG) Human Resources Executive Committee since 2014.
As Human Resources director, Larson has been instrumental in the implementation of the Affordable Care Act (ACA), and has been a team leader in training SGTC supervisors and employees, carrying out the ACA plan of action, and monitoring activity each pay period and fiscal year since inception of the program.
“Sandy has dedicated many hours into the planning and implementation of the Affordable Care Act, and I am glad she has been recognized for this effort,” said her supervisor, Janice Davis. “After more than a year in the game, SGTC has been 100 percent successful in the implementation of the program,” Davis added. “She displays exemplary HR services and delivers, supports, promotes, and provides a true quality-driven culture and experience to our employees. She’s consistently professional, positive, courteous, and friendly, and she serves as a role model and mentor, leading by example, showing initiative, and serving above and beyond the normal parameters of her position as Human Resources director.”
Larson works with each SGTC department from the point of posting job ads, interviewing potential candidates, and hiring and orientation of selected applicants.
She has a bachelor’s degree in business administration in accounting from Georgia Southwestern State University. She also completed the primary governmental accounting series from the University of Georgia and completed an online course for government officials from the Carl Vinson Institute of Government at UGA.
She and her husband Marty reside in Americus with their two daughters, Ashley and Anna Grace. They are members of Overflow Worship Center in Ellaville.