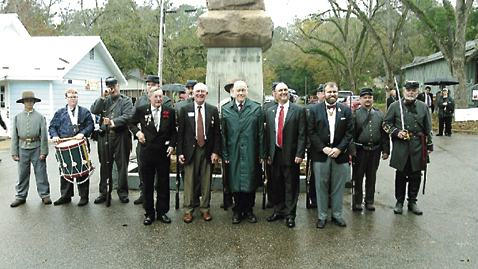 The principals involved in the 40th annual Henry Wirz Memorial Service in Andersonville. At center, in the green raincoat, is Col. Henrich Wirz, a great-grandnephew of Henry Wirz. He traveled from Switzerland to attend the service.

ANDERSONVILLE — The Capt. Henry Wirz Sesquicentennial Memorial Service was held at 3 p.m. Sunday in the town of Andersonville in the Old Village Hall in Andersonville.
The annual memorial services began in 1976, and have been sponsored or co-sponsored (with the United Daughters of the Confederacy) by Alexander H. Stephens Sons of Confederate Veterans Camp 78 in Americus.
Guest speaker for this, the 40th service, was Louisiana author Ronald Kennedy, who along with his twin brother, Donald, wrote the book “The South Was Right,” which has sold over 130,000 copies. They had copies of the book to sell and autograph. The Kennedy twins have written four books together; their latest book together is Nullifying Tyranny. Ron authored Reclaiming Liberty, Nullification: Why and How, published as a free pdf download from the author’s website, and most recently Uncle Seth Fought the Yankees. The Kennedy twins are life members of the Louisiana Division and the National Sons of Confederate Veterans and are frequent speakers at SCV, Southern Heritage and other pro-Liberty groups.
Prior to the memorial service, the musical group, “A Joyful Noise,” performed from 2-3 p.m. in Andersonville.
SCV Camp 78 “Muckalee Guards” performed Honor Guard duties, and the closing rifle salute at the Wirz Monument.
Leland Park from North Carolina and son of “real son” Arthur Park, also attended. Arthur Park instigated the first memorial service in Andersonville in 1976.
Als attending was Col. Heinrich Wirz from Switzerland, great-grandnephew of Capt. Henry Wirz.
Capt. Henry Wirz was commandant of Andersonville Prison Camp, known as Camp Sumter, during 1864-1865. After the Civil War ended, he was arrested and taken to Washington where he was tried for war crimes before a military tribunal.  He was made a scapegoat for the South, found guilty and hanged on Nov. 10, 1865.
Prior to Sunday’s memorial service, a special luncheon was held in the Pope Center at South Georgia Technical College, organized by James Gaston, chairman of the Capt. Wirz Memorial Committee.
In addition to other special guests already mentioned, several others were recognized, among whom were several representatives from the United Daughters of the Confederacy; state Sen. Greg Kirk, R-Americus and state Rep. Mike Cheokas, R-Americus; state Rep. Tommy Benton, R-Jefferson; Andersonville Mayor Marvin Baugh; Curt Collier, representing SCV Commander-in-Chief Kelly Barrow and member of Georgia Civil War Commission; John Carroll, commander, Alexander H. Stephens Camp, SCV; Charlie Parks, representing Georgia Division SCV Commander Jack Bridwell; James King, commander of the Albany SCV Camp; David McAllister, member of the National Capt. Henry Wirz Committee;  Al Peary, editor of the Georgia Confederate newspaper, among others.
Col. Heinrich Wirz made brief comments.
“ … Please let me remind you of what happened 150 years ago in Washington, D.C. On the sixth of November, 1865, the Military Commission finds Capt. Henry Wirz guilty and sentences him to death by hanging. … he turns to President Andrew Johnson and petitions for mercy. ‘The pain of dying is short. I therefore ask you to announce your decision immediately. Give me death or give me liberty. The one I do not fear, the other I long for.’
“His petition as well as the one by his lawyer … and others are not answered. President Johnson responds by setting the date for execution for Nov. 10, 1865. On the eve of the execution (Wirz’s lawyer) and the inmates’ spiritual counsel Rev. Francis Xavier Boyle receive mysterious visitors. They are representatives of the U.S. government and suggest a deal. If Henry Wirz were to name the former President of the Confederacy, Jefferson Davis, as a causer of the factual conditions at the Andersonville Prison, his death sentence would be c 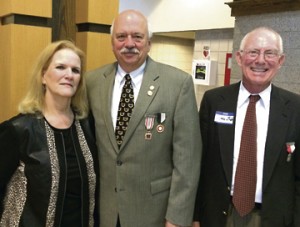 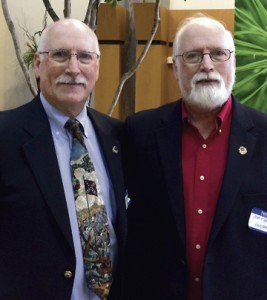 Ronald and Donald Kennedy, otherwise known as ‘The Kennedy Twins,’ have written several books about the Civil War. Ronald was speaker at the Wirz Memorial Service in Andersonville Sunday. 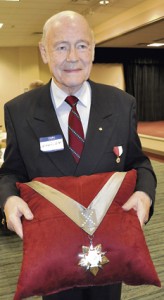 onverted into life imprisonment. Capt. Wirz refuses to place the blame on President Davis in order to save his life and turns the offer down. ‘If I knew anything, I would not turn a traitor now, not even to save my life.’
“On the day of his death he writes his last moving letters to his beloved wife Elizabeth and his lawyer … At the end of his short life, Henry Wirz wants to show the world that the Swiss man knows how to die and speaks his … last words at the gallows as a faithful Christian. ‘I come before God, the Almighty God. He will touch me. I am innocent and will die like a man.’
“I thank you all for being here. My special thanks go to James Gaston, chairman of the Wirz committee and his wife Nancy for their great Southern hospitality; to John Carroll and to James King … Ladies and gentlemen, I have not yet lost my faith in American justice and hope that Henry Wirz will one day be exonerated. God bless you and the sister republics, the United States and Switzerland.”

Submitted by Kellette Wade:Bob McKinnon poses with a football in the AHS Class of 1966 yearbook. McKinnon pulled down a... read more