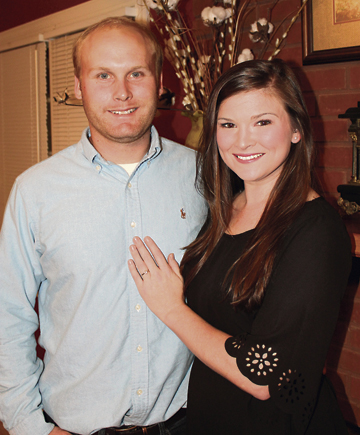 Mark and Sharon Israel of Smithville announce the engagement of their daughter, Kayla Sharon Israel of Smithville, to Alan Jean Jones of Weston, son of Mr. and Mrs. George Jones of Weston.
The bride-elect is the granddaughter of Mr. and Mrs. Harold Israel of Smithville, Mr. and Mrs. Bill Barhold of New York and the late Gwen Seymour of Dawson.
She is a 2007 honor graduate of Southland Academy. She is a 2014 graduate of South Georgia Technical College nursing program and plans to continue her education at Darton State College. She is currently employed at AfterHours Care of Americus.
The future groom is the grandson of the late Arnold and Callie Dacus of Richland, the late G.W. Jones of Richland and Grace Camp of Weston.
He is a member of the Terrell Academy class of 2007, and graduated from Darton State College in 2013, with a degree in history. He is employed at West Chatham Warning Devices in Preston.
The wedding is planned for Nov. 14, 2015.