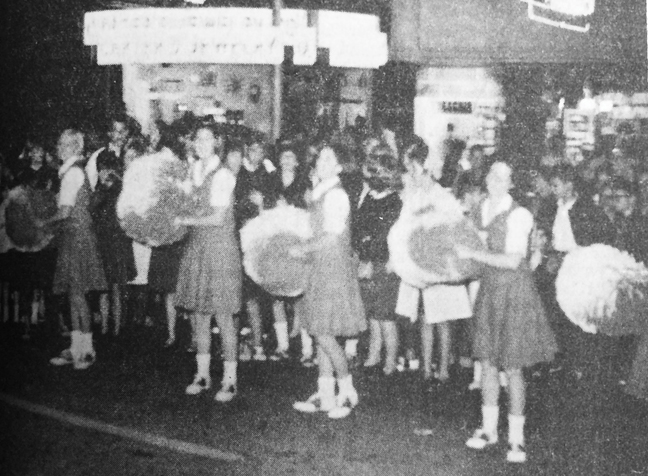 Editor’s Note: Here at the Americus Times-Recorder, we’re very proud of our area’s rich history of sporting excellence. One of the area’s most celebrated historical periods of athletic prowess was the Americus High School Panthers’ 1965 season, in which the team went undefeated, rolling over opponent after opponent on their way to a sweep of the state championship series.
While delving through our back issues and expansive archives, we have uncovered a wealth of photographs and articles written by former Times-Recorder sports editor, the late Clarence Graddick, during that era.
After dealing the 34-6 defeat to Mitchell County and giving up the team’s first touchdown of the season, the Americus Panthers went on to grab another solid win over the Thomasville Bulldogs before preparing to take on Cook County once more for the region championship.
As the team prepared for the big game, Graddick published a series of articles, detailing the town’s overwhelming excitement and the team’s progress.
“The students and football fans held a large rally in downtown Americus Thursday night on Jackson Street,” Graddick wrote on Nov. 19, 1965. “The Americus High cheerleaders led the group of about 300 in cheers and the pep band supplied music throughout the rally.”
As for the team, Graddick reported that all of the Panthers were in good condition, except for junior halfback, Jerry Plant, who had pulled a leg muscle earlier in the week and would likely not be dressed for the game.
“Americus has been made a slight favorite in the game since the Panthers defeated the Hornets 13-0 in a regular-season game which did not count in region play,” Graddick stated later in the article… Cook had a 6-2-2 overall record on the season as compared to a 9-0-1 record for Americus. Normally, the record can be thrown away when these two teams meet in a game of this caliber.”
Graddick went on to say that the Hornets likely had a bone to pick with the Americus squad, since the Panthers’ 1962 team had edged the Cook County crew 9-8 in that season’s region championship.
The Nov. 20, 1965 edition of the Times-Recorder featured an article describing Dr. Martin Luther King’s efforts to have a trial moved from Atlanta to New York, after he was sued by a New York police officer for alleged slanderous comments regarding a murder that occurred the previous year. The edition’s sports page included an article on the Georgia Bulldogs’ head coach, Vince Dooly’s displeasure at the team’s performance on the practice field as well as advertisements for John Wayne’s newest film, The Sands of Iwo Jima, which was scheduled to be shown at the local Sunset Drive-in.
The page was dominated, however, by a detailed account of the previous evening’s gridiron action. In an article, titled, “Americus wins region title with 14-7 win over Cook”, Graddick recounted the game for Times-Recorder readers. A portion of this article is shared below:
—————————————–
AMERICUS WINS REGION TITLE WITH 14-7 WIN OVER COOK: Faces Thompson Next Week For South Georgia Crown