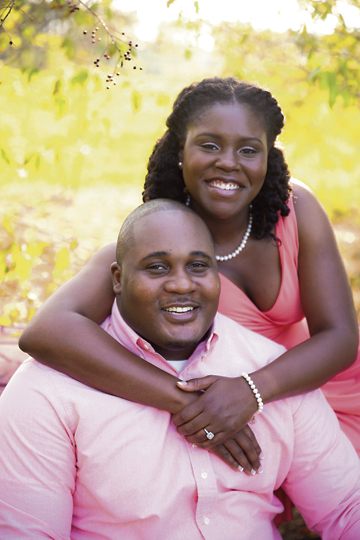 Garbowski McKenzie of Byromville and Dorothea Lusane-McKenzie of Americus announce the engagement of their daughter, Shariah McKenzie of Americus, to Jontu Solomon, son of Freddie Harris Jr. of Alpharetta and Melinda Solomon of Ellaville.
The bride-elect is the granddaughter of Henry Lusane Sr. of Americus and the late Doris Lusane, Alfaye Williams of Byromville and the late Clarence Williams, and the late Carl McKenzie Sr. of Byromville.
She is a 2008 graduate of Americus-Sumter County High School and graduated from the University of Georgia in 2012, with a bachelor of science in psychology. She graduated from Emory University, Atlanta in 2014, with a bachelor of science in nursing. She currently attends Emory University pursuing a master of science in nursing, family practitioner and midwifery.
The future groom is the grandson of the late Robert Lee Solomon Sr. and the late Maggie Ross Solomon of Ellaville, Freddie Harris Sr. of Ideal and Shirley Fulks of Ideal. Louise Harris of Ideal is his great-grandmother.
He graduated from Schley County High School, Ellaville in 2008,  and from Georgia Southwestern State University, Americus in 2012, with a bachelor of science in biology. He currently attends Morehouse School of Medicine in Atlanta, pursuing a doctor of medicine degree.
The wedding is planned for 2 p.m. Dec. 20, 2015, at the Rylander Theatre, 310 W. Lamar St., Americus.