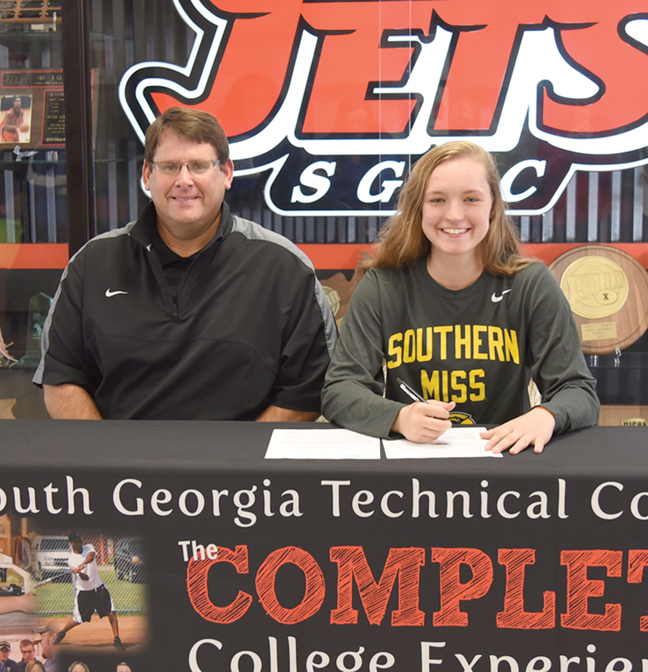 Submitted by South Georgia Technical College: James Frey, at left, is shown above with Lady Jet, Molly Brown, signing a letter of intent to play her junior season with the University of Southern Mississippi Golden Eagles.

AMERICUS – South Georgia Technical College’s Lady Jets sophomore Molly Brown of Douglasville, GA, signed a national letter of intent recently to play basketball with the University of Southern Mississippi Golden Eagles as a junior during the 2016-17 season. She will complete her sophomore season with the Lady Jets.
Brown, a 5’ 10” shooting forward, started 17 of 28 games for the Lady Jets as a freshman. She averaged 9.3 points per game as well as 7.2 rebounds, 1.3 assists and 1.7 steals. She is a 46% shooter from the field and hit 37.7 percent of her three point shots and 73.2 percent of her free throws.
SGTC Athletic Director and Lady Jets head basketball coach James Frey said, “Molly Brown is a great player but even more important, she is a great person.  The University of Southern Mississippi is getting the complete package with Molly Brown.”
“We are blessed to have Molly Brown in our program,” Frey continued. “ We appreciate her trusting us to help her get to where she wanted to go as a student and as a basketball player… I look forward to watching her grow this season and then as she continues her student athlete career at the University of Southern Mississippi.”
After her outstanding freshman season with the Lady Jets, Brown was selected to represent South Georgia Technical College as one of the top 40 NJCAA Student-Athletes of the year this past summer at the NJCAA Women’s Basketball Coaches Association All-Star Weekend in Niceville, FL.
At that competition, Brown was selected as the first recipient of the National Junior College Athletic Association (NJCAA) 3-D award named for the late Patrick Harrington, former head coach of the Northwest Florida State Lady Raiders women’s basketball team.
As a freshman, Brown helped lead the Lady Jets to a 29-8 season, which is the second best record in the history of the women’s basketball program at SGTC.
The Lady Jets finished second in the Georgia Collegiate Athletic Association (GCAA) regular season and captured their second consecutive National Junior College Athletic Association (NJCAA) Region XVII tournament championship, second NJCAA District J tournament title, and earned their second consecutive trip to the NJCAA National Tournament in Salina, Kansas.  The Lady Jets were seeded 17th in the nation in the NJCAA national tournament and finished in the top eight in the nation.
The University of Southern Mississippi Golden Eagles are coached by Joy Lee-McNelis and they are coming off their second straight 25-plus winning season and their second straight WNIT post-season appearance.