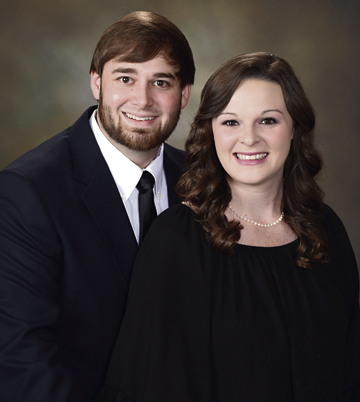 Keith and Tara Phillips of Ellaville, and Fred and Lindsey Shott of Gulf Breeze, Fla., announce the engagement of their daughter, Kayla Ashley Phillips of Ellaville, to William Tyler Barrett of Americus, son on Billy and Karen Barrett of Americus.
The bride-elect is the granddaughter of Aaron and Elaine Phillips of Ellaville, and Tommy and Kathleen Smith of Ellaville.
She is a 2010 graduate of Southland Academy, Americus and a 2015 graduate of Georgia Southwestern State University with a bachelor of science in education. She is a Pre-K teacher for the Crisp County Board of Education, Cordele.
The future groom is the grandson of Hollis and Garland White of Americus, JoAnn Seawright of Americus and the late Bill Barrett.
He is a 2009 graduate of Southland Academy. In 2012, he received an associate of applied arts in recreation and leisure management from South Georgia Technical College, and in 2014, he earned a diploma in aviation maintenance technology from the same institution. In 2015, he received a certified license for power plant mechanic. He is employed as supervisor of the tempering department at Southern Wholesale Glass.
The wedding is planned for 5 p.m. Dec. 12, 2015, at Central Baptist Church, 190 Upper River Road, Americus.