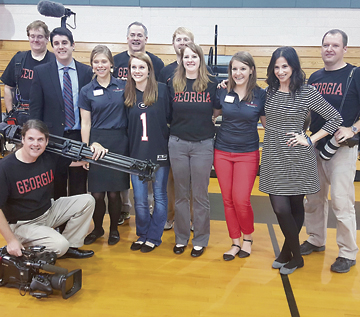 McKenzie Tobin, wearing the No. 1 Georgia shirt, with the Admissions Department and film crew from UGA.

ELLAVILLE — On  Nov. 12, the University of Georgia’s (UGA)  Admissions Department arrived on the Schley County High School campus to make a special — and highly secretive — presentation. McKenzie Tobin, a senior at the school, who had already been notified that she was the first applicant to UGA back in September, was presented with an official acceptance, along with a No. #1 bulldog jersey, as the very first freshman admitted for the class of 2020. The entire school was present for this surprise announcement.
UGA Admissions officials began arriving in Ellaville late Wednesday, interviewing local residents, then teachers, administrators, friends and family for a video that will feature Tobin, and the entire Schley County community, and posted to the UGA website (www.uga.edu).
“I’m incredibly honored and excited,” Tobiin said after the announcement. “I have dreamed of going to UGA since I was young.”
She  is the daughter of Jamie Frost, of Ellaville, and Kevin Tobin of Rome, Georgia. She is a 4.0  honor student will numerous honors and recognitions, including membership in Beta Club, Sigma Alpha Phi, FBLA, FCCLA, and awards for highest average in several science classes, the 1700 SAT Club, and competitions in various extra-curricular activities.  She has served as a mentor for young students, a missionary for her church, and a volunteer at Deep South Canine rescue.  She has served as cheerleading captain, Homecoming Queen, and is one of this year’s Senior Superlatives.
She feels like she’s just getting started.
“I’m ready to see what UGA has in store for me,” she said.
The rest of her Schley County family feels much the same way.
Schley High Principal Todd West said, “McKenzie will do great things; she’s a great kid,”and Johnnie Jarvis, her English teacher, said, “I am so happy for her, but not surprised,”a sentiment shared of most of the people who know her.