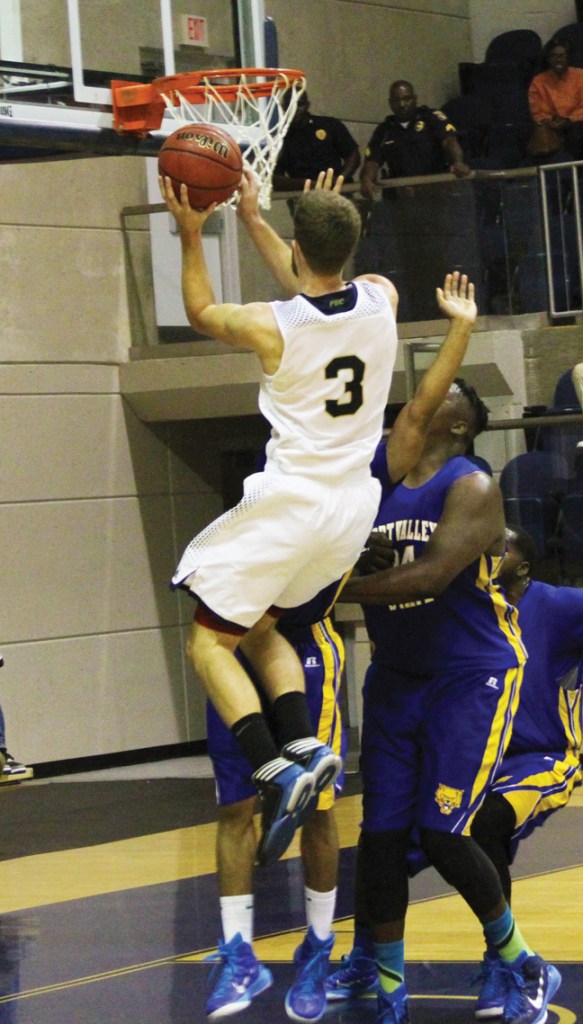 Michael Murray/Americus Times-Recorder: Adam Thoseby takes a shot in GSW’s home opener in November. Thoseby was named All-Tournament after leading the ‘Canes with 20 points in their win over the Gallitos on Nov. 28.

MELBOURNE, Fla. – The Georgia Southwestern men’s basketball team split with one win and one loss at the Florida Tech Thanksgiving Tournament last weekend, opening the tournament with a 73-62 loss to North Greenville University on Nov. 27 in the semifinals. The ‘Canes picked themselves up the next morning to take down Puerto Rico-Rio Piedras, 79-75, in the consolation game.
According to a GSW press release, the ‘Canes struggled from beyond the arc in the second half Friday afternoon and faded down the stretch as the North Greenville Crusaders took the win.
GSW found its groove from long range during a 15-5 run in the first half that ended with three consecutive three-point baskets from Damien Leonard to take its largest lead of the game, 31-24, with 6:40 remaining before the break.
The Hurricanes relinquished their lead in the closing minute of the first half and a three-pointer at the buzzer by Korval McElroy put North Greenville on top, 42-39, at half-time.
Jure Gunjina made a lay-up for GSW to open the second half and pull within a point, but that’s as close as the Hurricanes would get the rest of the way.
McElroy scored with 12:22 to play to give North Greenville its first double digit lead, 55-44.
The Hurricanes responded with seven unanswered points to pull within four with 9:12 to go, but missed the only two shots they took over the next 2:45 and found the Crusaders back up by nine points, 60-51, at the 6:27 mark.
A late 9-0 run by North Greenville put the game out of reach for the Hurricanes.
The Crusaders finished with a higher shooting percentage (50.9 percent) than GSW (39.7 percent), dished out four more assists (16-12) and won the battle on boards (37-29).
Chandler Thomas posted his first double-double of the season as he led GSW with 12 points and 10 rebounds. Leonard added 11 points and Karon Wright scored 10.
The Hurricanes returned to the court with a vengeance the next day as the team shot a sizzling 61.4 percent on Saturday afternoon to hold off the Puerto Rico-Rio Piedras Gallitos, 79-75, in the consolation game.
GSW’s Adam Thoseby led the Hurricanes with 20 points and was named to the all-tournament team.
The Gallitos led momentarily in the opening two minutes of the game before relinquishing the lead for good when Thoseby made a lay-up with 17:21 remaining in the first half to put the Hurricanes ahead, 4-3.
GSW utilized a 20-5 run midway through the period, sparked by seven of nine shooting, to open up a 28-13 advantage with 4:12 left before the break.
The Hurricanes opened an 18-point advantage, their largest lead of the game, at 35-17, with 28 seconds left in the first half after Wright scored on back-to-back possessions. GSW led 35-19 at half-time.
Puerto Rico-Rio Piedras opened the second half on a 13-2 run to quickly pull within five points, 37-32, with 14:55 to play. GSW pushed its lead back to 13 behind back-to-back three-pointers from Leonard and Gunjina.
The Gallitos chipped away at the deficit and climbed to within a basket, 55-53, with 6:11 remaining. GSW once again withstood the comeback. This time, the Hurricanes made six consecutive free throws and added a three-pointer by Brandon Price to take a seven-point lead, 64-57, into the final 4:20.
Omar De Jesus knocked down a pair of free throws with 43 seconds left to get Puerto Rico-Rio Piedras within four, 74-70, but Wright scored on the ensuing GSW possession to push the lead back to six and after a stop on the other end, Gunjina made one of two free throws to stretch the lead to seven.
Puerto Rico-Rio Piedras had one final flurry left as the Gallitos made a lay-up with 10 seconds to go, stole the ball and De Jesus drained a three-pointer to cut the Hurricanes lead to two, 77-75, with six seconds on the clock.
Thoseby calmly sank a pair of free throws to secure the victory.
The Hurricanes controlled the glass on Saturday, outrebounding the Gallitos, 37-21, and dished out six more assists (18-12). It was GSW’s season-high 28 turnovers that helped Puerto Rico-Rio Piedras keep the game close.
Thoseby connected on six of eight shots and eight of nine attempts from the free throw line to post his first 20-point night of the season. Gunjina scored 16 points and tied Thoseby for the team lead with seven boards. Wright made six of seven shots coming off the bench to finish with 16 points after leading Southwestern with 11 in the first half. Leonard added 11.
The Hurricanes returned to Americus to host Tuskegee on Dec. 1. The results of this contest were not available at press time. Following that match, the ‘Canes will take a break as they prepare to face the Emmanual Lions in Franklin Springs on Dec. 14.