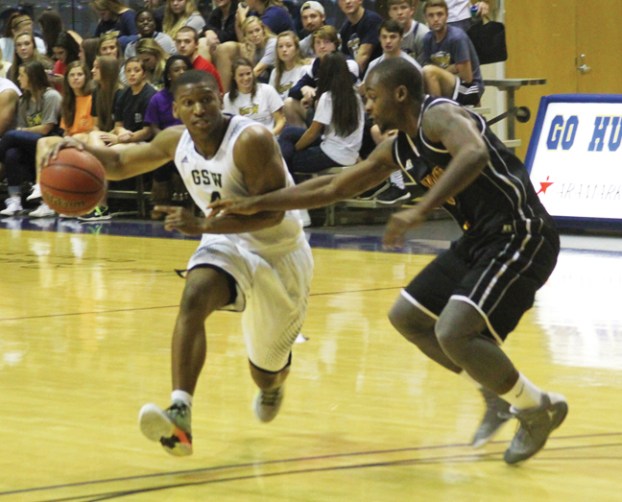 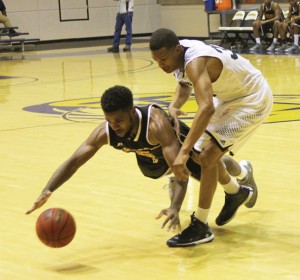 Michael Murray/Americus Times-Recorder:
Damien Leonard and a Tuskegee defender scramble for control of a loose ball during the ‘Canes’ Dec. 1 match in Americus. The Hurricanes won the match 76-56. 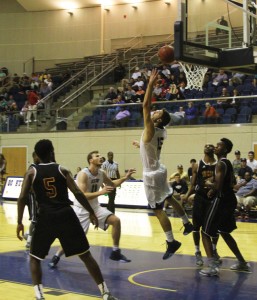 Michael Murray/Americus Times-Recorder:
GSW’s Jure Gunjina tosses in a shot from under the basket in the storm dome on Dec. 1. Gunjina scored a game-high 23 points in the ‘Canes’ match against Tuskegee.

AMERICUS – It was a second half to remember for the Georgia Southwestern men’s basketball team on Dec. 1 as the Hurricanes shot a scorching 70.8 percent to run away from Tuskegee University, 76-56, in the Storm Dome. Jure Gunjina poured in a game-high 23 points to lead GSW.
The Hurricanes improved their record to 4-2 overall while Tuskegee fell to 4-3. The win for GSW avenged a 10-point loss at Tuskegee back on Nov. 21.
The first half on Tuesday was a slugfest as the teams were tied on 10 different occasions. The largest lead held by either side during the initial frame was only four points and, fittingly, the score was tied, 28-28, at the half-time break.
Gunjina drained a 3-pointer with 16:18 left in the second half to even the score at 35-35. That bomb sparked a 22-2 run for the Hurricanes.
GSW went 10 minutes without missing a shot. The Hurricanes drained 13 consecutive shots, including three from beyond the arc.
Southwestern opened its largest lead with 2:33 remaining. A pair of Damien Leonard free throws put the Hurricanes ahead by 25 points, 73-48.
Making 50 percent of their three-point attempts over the final 20 minutes actually hurt the Hurricanes’ second half shooting percentage as GSW sank 13 of 16 shots (81.3 percent) from inside the arc.
The Hurricanes controlled the glass overall, out-rebounding the Golden Tigers, 34-24, and dished out seven more assists (16-9).
Gunjina connected on 10 of 16 shots to post his fourth double-digit scoring night of the season. He added six rebounds. Karon Wright made five of nine shots and all three of his free throws in 19 minutes of action to finish with 16 points for the second straight game. Adam Thoseby chipped in 12 points, grabbed a team-best eight rebounds, and dished out five assists.
James Eads led Tuskegee with 12 points. Elijah McMillian added 11 points and Kevin May scored 10. The Golden Tigers struggled from long range as they were held to three of 18 (16.7 percent) shooting from beyond the arc.
The Hurricanes return to action on Dec. 14 when they host Emmanuel at 11 a.m. for Sumter County Schools Education Day.