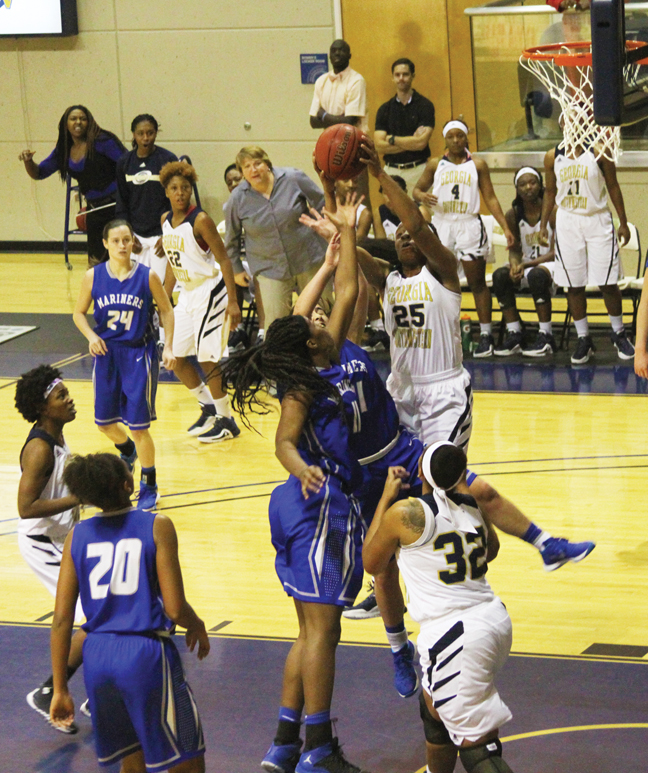 Michael Murray/Americus Times-Recorder: Khayla Owens (25) battles for a rebound against a pair of Mariner defenders during the final frame of the Lady ‘Canes’ Dec. 1 win over Coastal Georgia at the Storm Dome in Americus. Also pictured are her teammates, Emili Russ (32) and Jasmine McSwain (22), who both scored in double digits during the test.

AMERICUS – With a rally in the fourth quarter on Dec. 1, the Georgia Southwestern women’s basketball team remains undefeated and is now 5-0 after their seven point win against Coastal Georgia in the Storm Dome.
The Mariners put in the first basket and Va’Queshia Hall tied it within seconds. The lead changed six times in a matter of 40 seconds until Coastal Georgia put in three baskets to take a seven point advantage with three minutes left in the first.
Emili Russ sank two baskets to cut the lead by three, but Coastal Georgia sank a three-pointer to expand the margin by six at the end of the first quarter.
GSW caught up in the second frame with help from Hall and Khayla Owens, who drained the first two baskets, followed by Whitney Young with a three-pointer and Aleah Holden with a layup.
Jasmine McSwain made a a layup to put GSW within one point with 2:41 remaining, but Coastal Georgia made a free throw to lead 26-24 at halftime.
Coastal Georgia scored 25 points in the third quarter, compared to GSW’s 19, to take an eight point advantage heading into the final period.
With their first loss slowly creeping up, the Lady ‘Canes needed to dig deep in the fourth to remain undefeated and that’s exactly what they did.
Hall made two baskets back to back, followed by a jump shot from Ownes to put GSW within five.
The Mariners made a basket and GSW responded with a three-pointer from Young, followed by a jump shot from Hall to take the lead by one with 7:36 to go.
The next five baskets were from the Lady ‘Canes to take an 11-point advantage after being behind for most of the game.
Coastal Georgia brought it within six with 2:52 remaining and fouled. Holden made both free throws and the Mariners responded with a basket to keep the score within six.
McSwain put in a free throw with 36 seconds remaining to take the seven-point win, 67-60.
Hall had 15 points and six rebounds. McSwain scored 15 points and Russ had 10. Owens contributed eight points and eight rebounds while Holden had eight points and six rebounds. Kwante’sha Love and Armstrong each had four assists.
GSW out rebounded Coastal Georgia 44-31. Coastal Georgia shot 64.7 percent from the charity stripe, compared to GSW’s 55.6 percent.
The Lady ‘Canes hit the road Dec. 12 to play Emmanuel at 2:00 p.m.