Roy Eaddy: Putting the pieces together 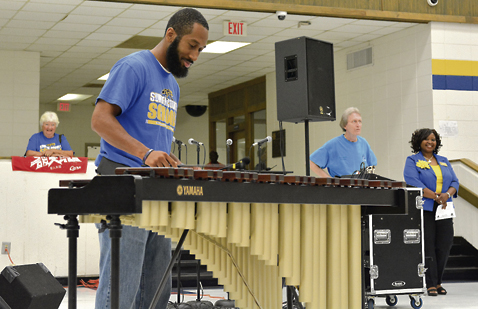 Roy Eaddy plays zylophone along with the Sumter Middle School Rhythm and Rhyme.

AMERICUS — Roy Eaddy is unique as far as band directors go. The Sumter Middle School and Intermediary School band director doesn’t come from a background of notes, but instead comes from a background of rhythm. A drummer who is skilled in all areas of percussion, Eaddy’s feel of the music gives him an ability to know it in a way others might not.
“Because I’m rhythmically inclined, I can pick apart what is really going on in the music. I can dissect it and make it make sense,” he said. “I see music as a puzzle that I break down and put back together to find out how the pieces fit.”
Eaddy remembered when he was eight years old seeing a marching band coming down the street and being overwhelmed by the feeling of the base drum in his chest.
“I’ve been trying to replicate that feeling ever since,” he said.
His parents soon signed him up for private drum lessons, and he played in bands and at church throughout his school years. He then went to Albany State University where he played in jazz band and symphonic band, once even playing behind Frank Sinatra Jr. But his passion for education was sparked when he played in the band for the former Arena Football Team in Albany and the team left, but the band remained. Eaddy took the reins and created a marching band, finding that he enjoyed leading the other musicians and teaching them what to do, thus beginning a journey that continues each day he gets in front of his students.
“I’m growing, learning more about myself as I see growth in the students,” he said.
Teaching also provides him with a consistency that a career in music might not otherwise offer.
“I have to come to work every day and take all I know and feel and it pour it all into the kids,” he said.