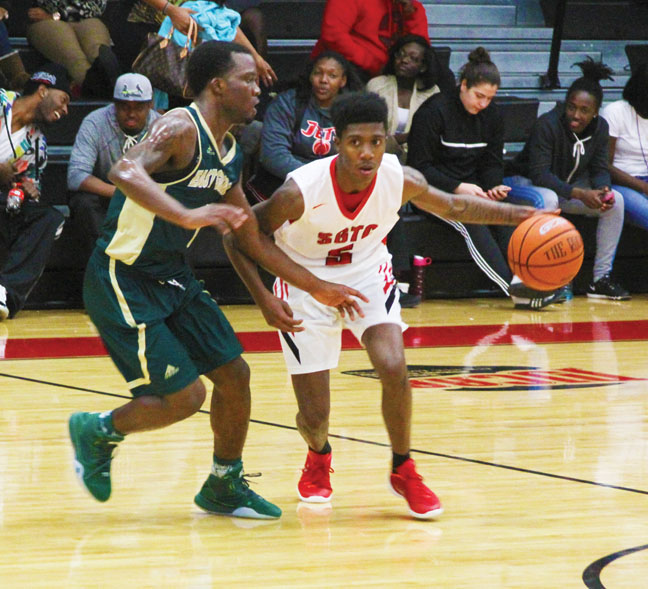 Submitted Photo: SGTC’s Torico Simmons dribbles past an EGSC defender in the second half of the Jets’ Dec. 5 match against the Bobcats.

AMERICUS – The South Georgia Technical College (SGTC) Jets and Lady Jets celebrated a pair of significant GCAA victories on Dec. 5, as both teams rolled over their East Georgia State College (EGSC) opponents at the Hangar in Americus.
The win leaves the Jets with an overall record of 9-4 on the 2015-16 season. The Jets are 1-1 in the GCAA. The Lady Jets’ overall record is currently 7-3, while their GCAA record stands at 2-1.
Both teams are currently in fourth place in their respective conferences.
The Lady Jets came out strong in the Dec. 5 match-up, outscoring the Lady Bobcats 45-27 through the first half of the game. The onslaught continued in the second half, with the SGTC ladies posting 36 more, while holding EGSC to only 24 for the 81-51 win.
SGTC had three players post double figures in the match.
Mikaela Jones led the pack with 18 points and nine rebounds. Molly Brown shot a close second, with 15 points and eight rebounds. Angela Thompkins brought up the rear, posting the game’s only double double with 14 points ad 10 rebounds. Claudia Perez came off the bench to add nine points and Brittney Delva contributed seven.
The Lady Jets more-than-doubled EGSC’s shooting percentage, sinking 53.1 percent of shots from the field, while ECSG hit only 26.4 percent.
SGTC also won the battle of the boards, as they brought down 52 total rebounds while the visitors snagged 24.
The Lady Bobcats topped SGTC from the free throw line, hitting 70 percent of their shots, while the SGTC ladies sank 10 of 20 for 50 percent.
Following this victory, the Jets took the court to battle the EGSC Bobcats.
The Jets got off to a slow start, but ended up controlling the court in the Dec. 5 contest, as they cruised to the 65-49 victory.
Clarence Smith paced the team with 15 points scored, four rebounds, two assists, and three steals.
Corbyn Jackson followed close behind, adding 13 points and 10 rebounds for a double double. Jackson also contributed three assists. Amir Warnock came off the bench to wrap up the double-digit scoring, adding 10 points and six rebounds. Jamal Norman contributed nine.
The Jets finished ahead of the EGSC Bobcats in nearly every category. The Jets shot 47.3 percent from the floor, while holding EGSC to 27.7 percent. SGTC sank 30.8 percent from three-point territory, while the Bobcats shot 23.5 percent. From the charity stripe, the Jets nailed nine of 14 attempts for  64.3 percent, while EGSC sank only 56.3 percent.
SGTC dominated the boards, out-rebounding EGSC 50-28, and caused 15 turnovers to the Bobcats’ nine.
Both the Jets and Lady Jets return to action on Dec. 10 in Americus, taking on Georgia Highlands College.