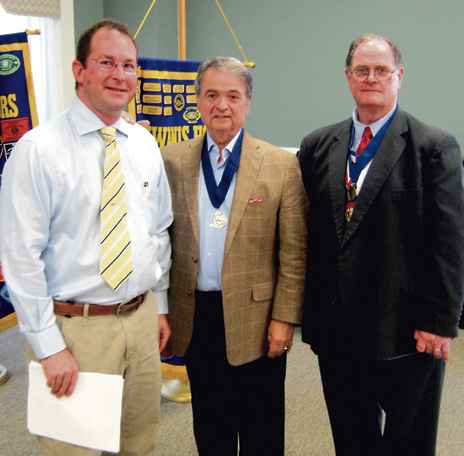 AMERICUS — Local businessman and Kiwanian George Saratsiotis recently became the recipient of the prestigious Zeller Award from the Americus Kiwanis Club, of which he is a longtime member.
In the presentation, fellow Kiwanian Len Hicks described Saratsiotis as someone who is always there, unassumingly volunteering on the various Kiwanis projects. He called him a businessman and a family man.
In accepting the award, Saratsiotis was humbled and surprised. He said he didn’t deserve an award, but was clearly honored, which was met with thundering applause and a standing ovation.
Saratsiotis, an accomplished tailor, immigrated to the United States in November 1973, to settle in Americus. He is married to Georgia Saratsiotis and together they own and operate George’s Menswear on North Jackson Street in downtown Americus. They have two daughters and two sons and five grandchildren.
In 1940, one year after the Kiwanis International Foundation was established as a legal entity, Walter Zeller made the first donation: 25 Canadian silver dollars that he hoped would turn into the foundation’s nest egg.
This donor’s dream came true. Auctioned for U.S. $625, his coins launched the Kiwanis International Foundation’s worldwide service efforts. Thousands of donors later, the foundation has grown into a multi-million dollar organization that awards grants to Kiwanis clubs and underwrites life-altering worldwide service projects.
A native of Waterloo County (near the city of Kitchener, Ontario), Zeller was the founder of Zellers chain of thrift stores. He began his business career in 1912, with a job as a stock boy with the F.W. Woolworth Co., and was later the general sales manager for the Metropolitan chain of stores for New York. He was considered by co-workers to be energetic, forthright, and magnetic, and served as director-at-large of the National War Savings Committee and a special advisor to the chairman of the Wartime Prices and Trade Board.
Zeller gave much of his life to philanthropy, serving as the Montreal Director of the YMCA and staying involved in many capacities with his Kiwanis club. He served as the Montreal President and Governor of the Ontario-Quebec-Maritime District.
On behalf of The Eliminate Project, the Americus Kiwanis Club is proud to honor George Saratsiotis’ commitment to service by bestowing him with the Walter Zellar Fellowship. This is a special opportunity designed exclusively for The Eliminate Project. Saratsiotis has joined an elite group of Kiwanians.