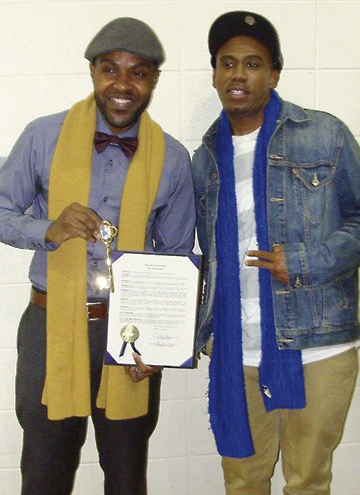 Jeffery Lewis, at left, is shown with his singing partner, Zuri Craig.

Jeffery Lewis given key to city

Americus native made it into finals of America’s Got Talent
AMERICUS — Americus native Jeffery Lewis was awarded a key to the city by Mayor Pro Tem Nelson Brown at a ceremony held at Americus Sumter High School. Brown also read a proclamation from the Mayor’s office.
Lewis, who was joined by band mate Zuri Craig, told the students in the gym to never let anyone deter them from their dreams.
“You all can do better than I did,” said Lewis, who spoke of his days as a student in the Americus school system. “The next time I come here I want to hear about some of the successes you have achieved.”
Lewis and Craig make up The Craig Lewis Band, which reached the finals of America’s Got Talent earlier this year.