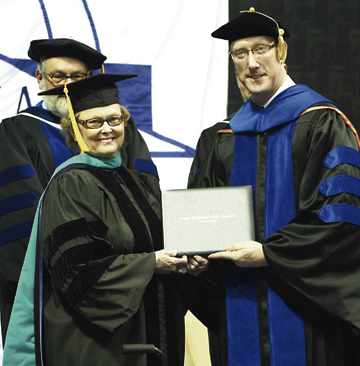 AMERICUS — Georgia Southwestern State University (GSW) held its Fall 2015 Commencement Saturday and conferred bachelor’s and master’s degrees to approximately 280 students. The event was held in Convocation Hall of the Student Success Center.
It was a particularly special day as Betty Pope, long-time friend and supporter of the University, was presented with an honorary Doctor of Public Service degree. Pope’s recognition followed Commencement speaker Sen. Dean Burke, M.D. (Bainbridge, Ga. – District 11).
“Educated citizens are the first step to improving the quality of life in our region,” said Burke, who is an alumnus of Georgia Southwestern. During his comments, Burke listed a series of habits he encouraged each graduate to develop as their life and careers progress. A few included: learning to live life with margin, learning to get out of your comfort zone and learning what is most important in your life so you know where to focus your time. Lastly, Burke said “Leaving the world better than you found it is the ultimate definition of a life well lived.”
GSW Interim President Charles Patterson, Ph.D., introduced Pope during the ceremony.
“Today, I have the distinct pleasure of conferring the University’s seventh honorary degree to Mrs. Betty Deriso Pope,” said Patterson. “An honorary degree is an academic degree that recognizes a person’s significant contributions to the public good.”
And Pope has made significant contributions. Her service to Georgia Southwestern includes 14 years as a member of the GSW Foundation Board of Trustees (1983-1997), leading the board as chair from 1988-1990 and continuing as a Life Trustee since 1997. She also has been a member of the Rosalynn Carter Institute for Caregiving board of directors since its establishment in 1987. In recognition of her multiple roles in advisory and leadership capacities, Pope was the inaugural recipient of the Georgia Southwestern President’s Medal.
“I’m very touched. I do appreciate [this honorary degree],” said Pope as she addressed the graduates and their family and friends in attendance. “Wherever your career takes you, try to become a part of the community and make a difference. Congratulations, graduates. I hope your lives are filled with happiness and success.”
Pope is the seventh person to receive an honorary doctorate from Georgia Southwestern. Past honorary degrees have been awarded to 39th U.S. President Jimmy Carter in 1981, John Pope in 1999, former first lady Rosalynn Carter in 2001, former executive with Knight Ridder Newspapers Don E. Carter in 2005, Business Executive and Philanthropist Jerry Newman in 2006 and former U.S. Attorney General Griffin Bell in 2008.
During the ceremony, Susan Robinson, associate professor of accounting and 2015 recipient of the GSW Teacher of the Year Award, will served as the Macebearer. Gary Kline, Ph.D., professor political science, was the Grand Marshal. 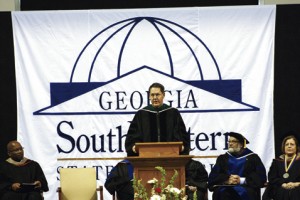 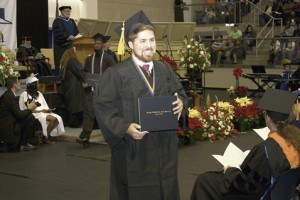 Colton Taunton was one of approximately 280 GSW graduates. An Americus native, Taunton earned a degree in psychology.