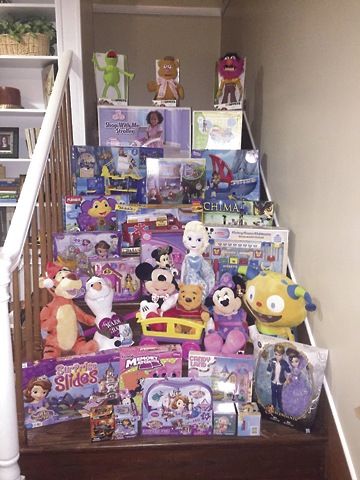 This is just a small sample of the gifts donated for foster children this Christmas.

AMERICUS — Foster children throughout the Southwestern Judicial Circuit will be given the magic and joy of play this holiday season thanks to toys donated by the Toy Industry Foundation (TIF) and distributed by National Court Appointed Special Advocates (CASA) Association.
Volunteers from the local CASA program received gifts from a donation of more than 600 toys with a retail value of approximately $8,000. Suitable for a variety of ages, the Disney-donated playthings include action figures, dolls, puzzles and games, outdoor play equipment and arts and crafts. These toys will be distributed to children in foster care throughout Lee, Macon, Schley, Stewart, Sumter and Webster counties.
“We know that the toys will show these deserving children that they are not forgotten during the holidays,” said Jean Butler, executive director of the Toy Industry Foundation. “They’ve experienced a great deal of adversity and we’re here to give them back an important piece of their childhoods — play!”
Stephanie Bennett, Program director for SOWEGA CASA, said the donated toys will have a wonderful impact on the children who are in foster care over the holidays.
“Holidays can be a very lonely and difficult time to be removed from family and tradition,” said Bennett. “The generosity of the Toy Industry Foundation will go a long way in bringing joy to the faces of the children we serve.”
The partnership between the Toy Industry Foundation and National CASA began in 2013. To date, TIF has distributed over 225,000 toys to foster children served by CASA programs. In addition, grant funds provided by TIF to the CASA network are helping to recruit and train needed CASA volunteers to stand up for the needs and rights of abused and neglected children. At any given time, there are more than 400,000 children in foster care. Last year, only 251,000 of them were assigned a CASA volunteer.
In addition to working with CASA, the Toy Industry Foundation works year-round to bring new toys and games to children who are underserved, at-risk, in hospitals, and in military families. To date, TIF has provided more than $125 million in toys to 19 million children in need.