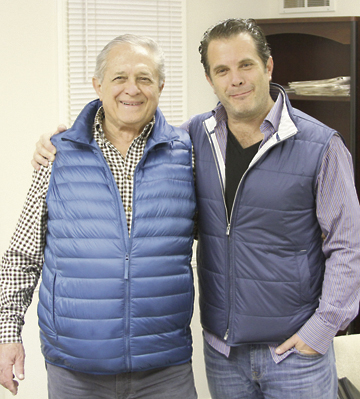 Jorge Americus, at left, and his nephew, Eduardo Americus in the offices of the Americus Times-Recorder.

AMERICUS — It isn’t often that you can actually meet people with the last name of Americus. But that’s exactly what occurred Tuesday morning as Eduardo Americus and his uncle, Jorge Americus dropped by the Times-Recorder offices downtown.
Eduardo said they had flown from their home in Mexico to see the Green Bay Packers game and had a layover in Atlanta. They figured since they were this close, they would finally see Americus, Georgia, so they rented a car and drove down.
Both men asked how Americus came to be the name of a city in South Georgia. Times-Recorder staff gave three options: the name had been drawn from a hat by City founders; it is an adulteration of “A Merry Cuss,” and that it may have been named for Amerigo Vespucci, the famous cartographer and explorer. Take your pick because these three have all been written about over the decades.
The men had come from the Americus Welcome Center where they had purchased several items bearing the name “Americus.” They said they had intended to visit Americus for quite some time, so were quite pleased to finally be here. When they were told that there is an Americus, Kansas, Eduardo said with a laugh, “Oh, no! We’ll have to visit there, too!”
The Times-Recorder staff urged them to visit the Windsor Hotel which is a slice of historic Americus, which they did. They commented that had they known of the Windsor, they would have stayed there but since they didn’t get into town until 2:30 a.m. Tuesday, they stayed at a motel in east Americus.
Jorge explained that his brother, Abe Americus, owns Americus Cattle Ranch in Tampico, Mexico. Upon Googling the Americus name, the Times-Recorder found that it is widely known in breeding circles in Mexico and the American Southwest.