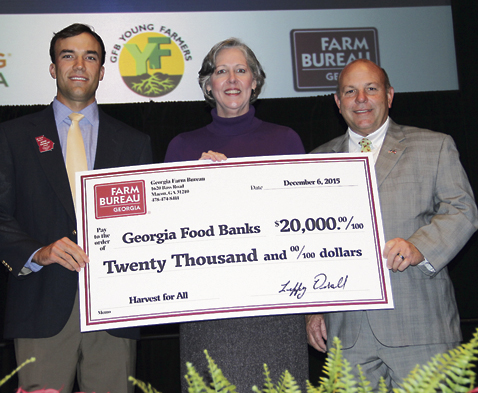 MACON —  For the sixth consecutive year, Georgia Farm Bureau (GFB) collected cash donations in its annual Harvest For All campaign, which generated $20,000 in donations from county Farm Bureau chapters and the home office.
According to the Georgia Food Bank Association (GFBA), one in four children in Georgia live in food insecure households — households in which there is reduced quality, variety, or desirability of diet, or those that have disrupted eating patterns or reduced food intake. Including adults, one in five Georgians live in food insecure households.
“The number of Georgians with limited access to quality food is truly staggering,” said GFB President Zippy Duvall. “The Harvest For All campaign is a way we can help reduce the hunger found in communities throughout the state.”
The GFB Young Farmer Committee coordinated the 11th Annual Harvest For All Campaign. Duvall and GFB Young Farmer Committee Chairman David Cromley presented a check to GFBA Director Danah Craft during Georgia Farm Bureau’s 78th Annual Convention on Jekyll Island.
In addition to helping with purchases of high-protein foods like chicken and peanut butter, donated money helps the GFBA offset costs associated with collecting and distributing food donations.
“The support we receive from Georgia’s farmers is making a big difference in the lives of Georgians in need,” Craft said. “These donations of funds and fresh produce enable the food banks to provide a more nutritious mix of food to clients. A total of 156,500 individuals are served every week by Georgia’s eight regional food banks and their 2,500 partner agencies.”
The GFBA started its Farm to Foodbank program in 2014, through which it accepts food donations direct from farmers, who give nutritious fresh fruits and vegetables that grocery chains won’t buy for aesthetic reasons.  For the second straight year Georgia’s farmers donated more than 10 million pounds of food, providing more than eight million meals, which Craft attributes to GFBA’s affiliation with Georgia Farm Bureau.
GFB’s Harvest For All donation will have a statewide impact. The Georgia Food Bank Association distributes the funds to America’s Second Harvest of Coastal Georgia in Savannah, the Atlanta Community Food Bank, the Chattanooga Area Food Bank (Food Bank of Northwest Georgia), Feeding the Valley in Columbus, the Food Bank of Northeast Georgia in Athens, Golden Harvest in Augusta, the Middle Georgia Community Food Bank in Macon and Second Harvest of South Georgia in Valdosta.
Past Harvest for All campaigns have solicited direct donations of food. Since 2004, GFB has coordinated 10 Harvest For All campaigns through which GFB members across the state donated about 49,000 pounds of staple food items and more than $140,000 in cash donations distributed to the food banks located thro“The struggle many Georgia families have in finding food in adequaughout Goergia affiliated with Feeding America.
“The struggle many Georgia families have in finding food in adequate quality or quantity is very real,” said 2015 GFB Young Farmer Committee Chairman  Cromley. “We are happy to help ease some of this need through the Harvest For All campaign.”
Founded in 1937, Georgia Farm Bureau is the state’s largest general farm organization. Its volunteer members actively participate in local, district and state activities that promote agriculture awareness to their non-farming neighbors. GFB also has 20 agricultural commodity advisory committees that give the organization input on issues pertinent to the major crops and livestock grown in Georgia.