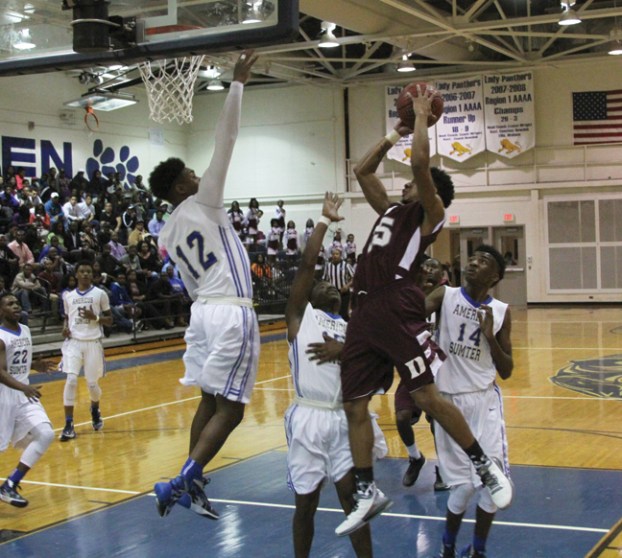 Michael Murray/Americus Times-Recorder: Kiante Sims (20) jumps up to block an opponent’s shot as Aiden Sanford (14) prepares to go for a potential rebound during an early December contest against Dougherty in Americus. Sims contributed an impresive 25 points to the Panthers’ victory over Colquitt County on Dec. 18. Sanford contributed 10 points in that contest.

ALBANY – The Americus-Sumter High School (ASHS) Panthers basketball team kicked off their Christmas vacation in style on Dec. 18 with an exciting 71-68 overtime win over the 6A Colquitt County Packers.
The ASHS boys capped off the year’s play in similar fashion, defeating Terrell County 73-45 on Dec. 22.
This pair of neutral victories brings the Panthers’ four-game skid to a screeching halt and leaves the Americus-Sumter boys with a 5-5 overall record on the 2015-16 season. The Panthers’ region 1-AAAA record currently stands at 2-3.
The Panthers, though outmatched in size, came out ready to battle when the action kicked off, and fought their way to a 15-10 lead in the first quarter. The Packers began to gain some steam in the second stanza, matching the Panthers nearly point-for-point to take a six-point deficit into the break. The half-time score was 30-24 in favor of ASHS.
Colquitt’s shooters heated up when play resumed and went on a scoring spree that netted the team 21 points in the third frame. A strong defensive push from the Packers held the Panthers to only 13 points in that period. With Colquitt’s most productive quarter of the game occurring alongside the Panthers’ least productive, the Packers manage to pull ahead and take a 45-43 lead into the final stanza.
The teams continued to trade jabs through the fourth quarter as the Panthers struggled to claw their way back to the top and the Packers stubbornly refused to let ASHS gain any significant ground. At the final buzzer, the teams found themselves dead even, with a 60-60 tie paving the way to an overtime round.
The Panthers took advantage of the tiebreaker round to add 11 points to their already impressive score while stifling Colquitt’s attempts to pull back ahead. When the dust settled, the Panthers celebrated a 71-68 victory.
Four ASHS men scored in double figures in the contest, with Kiante Sims leading the pack with a double double. Sims connected on half of his shots from the field and drained 11 points from the charity stripe on his way to a game-high 25 points. Sims also brought down 10 rebounds as he led the way to a Panther victory.
Fred Bryant, Eric Hall, and Aiden Sanford joined Sims in the double figure scorers, with 10 points apiece. Bryant honed on each of his two shots from three-point range to sink 100 percent from beyond the arc. Sanford shot 100 percent from the floor, sinking four of four from the lane and two of two from the free throw line. Hall led the team’s defenders with four steals.
Stephon Luster and Daylon Leary each contributed four assists to the win. Ben Walters contributed three steals and hit each of three attempts from the lane to tack on another six points.
All told, the Panthers shot 55.3 percent from the floor and 50 percent from the backfield as they clawed their way to another victory.
The Panthers returned to the court to defend their record once more before wrapping up 2015 with a Dec. 22 match-up against Terrell County. The Panthers won their final match o the year 73-45, bringing the team’s overall record to 5-5.
After a hard-earned break, the Panthers will return to 1-AAAA competition on Jan. 2 when they travel to Bainbridge to take on the Bearcats. The Bearcats are currently 3-2 in region competition. 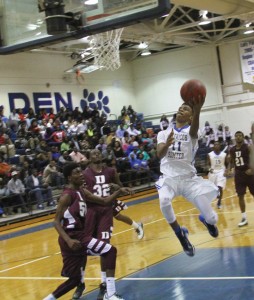 Michael Murray/Americus Times-Recorder:
Eric Hall (11) takes a powerful leap for a lay-up during an early December contest against Dougherty in Americus. Hall contributed 10 points to the Panthers’ Dec. 18 victory over Colquitt County.