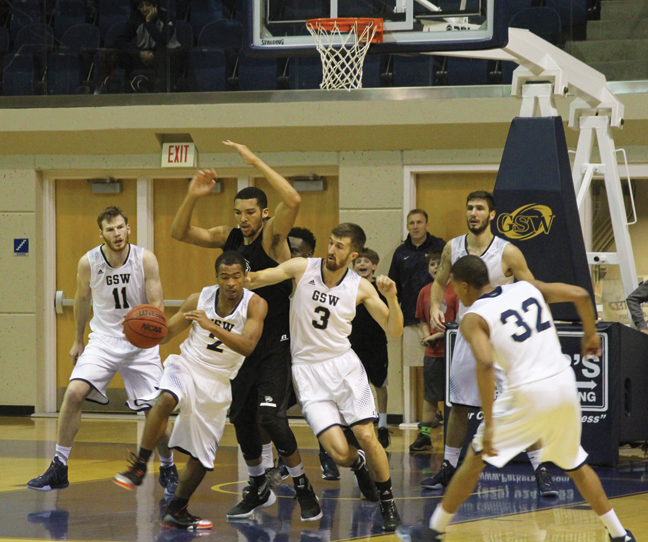 Michael Murray/Americus Times-Recorder: Brandon Price takes off with a rebound as Adam Thoseby sets a pick during a recent GSW contest against against Augusta in Americus. Thoseby added 23 points to the Hurricanes’ score in GSW’s Dec. 19 test against Lander University. Price contributed 15 points.

AMERICUS – The Georgia Southwestern State University men’s basketball team could not overcome an eight-point half-time deficit and saw the 2015 calendar year come to a close with a 77-70 loss to Lander University on the afternoon of Dec. 19 at the Storm Dome in Americus.
GSW fell to 5-4 overall, 1-1 in the Peach Belt Conference, while Lander won its fifth straight game and improved to 9-2, 3-0 in conference play.
Hurricane shooters were efficient over the opening 20 minutes, connecting on 7 of 14 attempts from long range (50 percent) and 13 of 23 shots overall (56.5 percent). That accuracy, however, only helped GSW build a modest lead of six points, 19-13, midway through the half.
Lander chipped away at the deficit and on a Tobiasz Hose lay-up with 7:07 remaining before the break, the Bearcats had regained the lead, 27-26. The visitors would not trail the rest of the game.
Lander led by eight at half-time, 42-34.
Back-to-back three-pointers by Damien Leonard pulled GSW within six points with 16:40 left. The Hurricanes cut the margin to six on six different occasions over the final 20 minutes, but that’s as close as they would get. The final time was after a pair of Brandon Price free throws with 1:59 remaining as GSW trailed 74-68.
While GSW finished with eight more three-pointers than Lander (12-4), the Bearcats held a substantial edge in free throws (21-6). The Bearcats controlled the glass as well, out-rebounding GSW, 44-28. The Hurricanes dished out eight more assists, 18-10.
Adam Thoseby scored 16 of this game-high 23 points in the second half to lead GSW. Thoseby made nine of 15 field goal attempts, including three of four from beyond the arc, and pulled down a team-best seven rebounds. Price chipped in 15 points and dished out eight assists. Leonard sank five of 11 from three-point range and joined Price with 15 points.
Hose knocked down eight of 11 shots coming off the bench for Lander and matched Thoseby with a game-high 23 points. J.R. Washington and Rahu Purdie added 13 points apiece.
The Hurricanes break for the holidays and return to the hardwood on Jan. 2, facing PBC opponents, the University of Montevallo Falcons. On Jan. 4, the team will travel to Milledgeville to take on another PBC foe, the Georgia College and State University Bobcats. The ‘Canes return to the Storm Dome on Jan. 6, where they will battle the Columbus State Cougars.