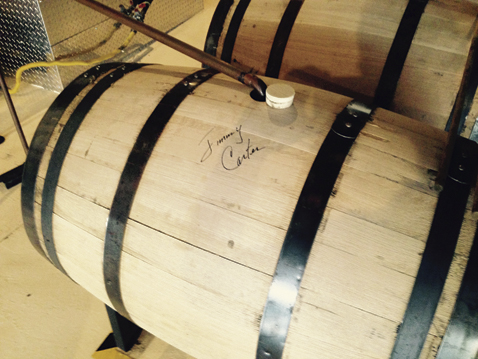 While on a holiday tour at Richland Distilling Co., President Jimmy Carter signed a barrel that was being filled during his visit. Proprietor Karin Vonk said the barrel contents will be bottled after proper aging and the proceeds will benefit one of the Carter’s favorite initiatives.

RICHLAND — Former President Jimmy Carter and first lady Rosalynn Carter, accompanied by more than 30 family members, visited Richland Distilling Co. on Dec. 30 in historic downtown Richland as part of a private family holiday tour of the area. The proprietors, Erik and Karin Vonk, along with distiller Roger Zimmerman, conducted the tour.
With the distillery in full production mode, an explanation for the artisan, “field-to-glass” creation of Richland Rum, highlighted aspects of sugar cane cultivation at the Vonk’s farm and outlined how the cane is processed into pure, unrefined syrup. Then, insight was offered into the authentic fermentation and distilling techniques that transform the homegrown syrup into Richland Rum.
In conclusion, barrel-aging techniques were discussed, revealing how the distillery’s unique “single-barrel” approach rounds out the flavor and aroma profiles of award-winning Richland Rum.
Many Carter family members asked detailed questions and showed an extraordinary interest not only in the artisan character, purity and authenticity of the product, but more specifically in the agricultural and economic development aspects of making rum in Georgia.
“It was such a pleasure and honor for Karin, Roger and me to host the Carter family,” Erik Vonk said, following the tour. “When I served on the Carter Center Board in the 1990s, it was President Carter who personally took me to the communities in Webster and Stewart counties and stressed the importance of economic development initiatives to bring back the prosperity they all once knew,” he explained, regarding his long association with the President.
“It has been the President’s inspiration, followed by the subsequent relentless efforts of Richland’s Mayor Adolph McClendon and Downtown Development Authority activist Chip Jones that encouraged us to decide to establish the distillery in Richland,” Erik Vonk added.
“The President has signed the barrel that was filled while the Carter family was here,” Karin Vonk offered. “It is not only an honor for us to have a ‘Presidential Barrel,’ but I am sure that once the rum it holds has matured, we will be able to monetize it at a premium and use the proceeds to benefit the Carter Center, or any of the many wonderful initiatives to which President and Mrs. Carter have dedicated their lives,” she added.
Richland Distilling Co., established in 1999, is located at 333 Broad St. in historic downtown Richland. It is the only “single-estate,” or “field-to-glass” rum produced in America. Award winning Richland Rum is distributed in the U.S., Europe, Australia and the Caribbean.
The Distillery is open for tours to the public. Call 229-887-3537 to arrange a tour. More information on the distillery can be found on the website at www.richlandrum.com

ELLAVILLE — TCI Powder Coatings has announced the opening of a new office in Americus. According to Doug Greene, president... read more