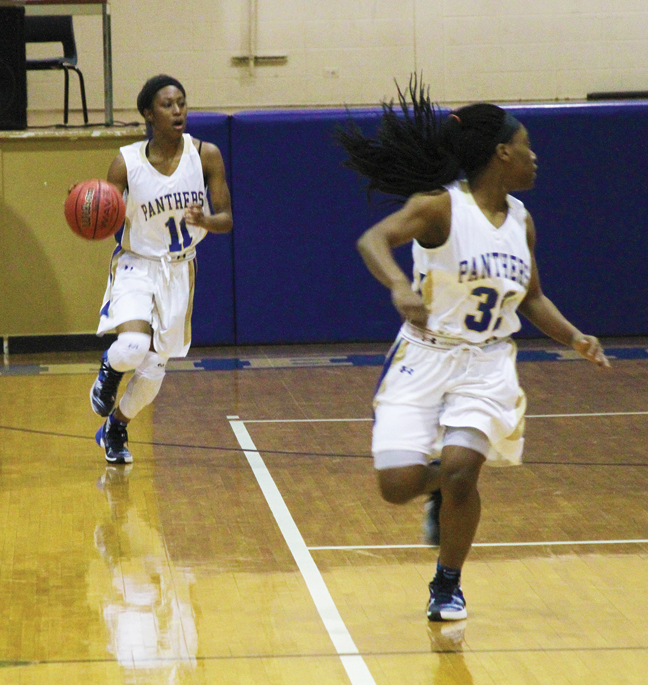 Michael Murray/Americus Times-Recorder: ASHS’ Amber Hicks (11) and Shidajiah Johnson (32) run down the court during a mid-December contest in Americus.

BAINBRIDGE – Both the Americus-Sumter High School (ASHS) Panthers and Lady Panthers started off the new year with a bang on Jan. 2, after traveling to Bainbridge to take on region 1-AAAA rivals, the Bearcats and Lady Bearcats.
The Lady Panthers kicked off the action with a 53-47 defeat of the Lady Bearcats. The Panthers staged a comeback in the fourth period of the evening’s nightcap to edge the Bearcats 50-49.
The victory leaves the Lady Panthers with a 12-1 overall record. The ASHS girls are still undefeated in 1-AAAA competition after six contests. The Panthers’ win boosts their overall record to 6-6 overall, with the team’s region 1-AAAA record holding steady at 3-3.
Fresh off of their 2-1 run in the Sunshine Shootout in Naples, FL. that saw the Lady Panthers suffer their first defeat of the season, the Americus girls rocketed off to a great start in the 2016 opener.
ASHS pulled ahead early in the contest, pushing their way to a 16-9 lead after the initial period. The lady Panthers continued to cushion their advantage in the second frame, outscoring the Lady Bearcats 12-10 before the half-time break.
The Lady Bearcats stepped up the competition upon returning from the break, however. They added 14 points to their tally in the third quarter, all the while holding the Lady Panthers to only 13. Bainbridge rode this momentum into the final period as well, outscoring the visiting ASHS crew 14-12. Unfortunately, for Bainbridge fans, the home team’s efforts did not prove to be enough to overcome the gap, and the Lady Bearcats were sentenced to a 53-47 defeat.
Later that evening, the Panthers hit the court to face the Bearcats. Both teams came out swinging in the bitter rivalry match, with the memories of the Panthers’ 2015 region tournament defeat of the Bearcats still fresh in the home team’s minds.
The Panthers gained a slight advantage in the first period of the match, posting 11 points to their host’s 10. The Bearcats’ shooters heated up in the second period, however, and tossed in 18 points to take the lead. With Americus scoring only 11 points in the second period, the Bearcats took a 28-22 advantage into half-time.
Both teams returned from the half-time break fired up and traded points for the next eight minutes, as the Panthers struggled to claw their way out of the hole and Bainbridge stubbornly refused to give up any ground. With each team tossing in 12 points in the third frame, the gap remained unchanged.
The fourth period, however, saw the Panthers ignite one of their characteristic late surges, as the Americus crew fought their way back into the lead, outscoring the Bearcats by a 16-9 margin to take the 50-49 win.
The Panthers were paced by the offensive efforts of Ben Walters and Eric Hall in the contest. Both shooters contributed 10 points to the win, with Walters bringing down a game-high eight rebounds to lead the team on the boards as well.
Aiden Sanford and Kiante Sims followed close behind with eight points apiece. Sanford contributed three steals to the Panthers’ victory. Stephon Luster and Eric Brown each dished out a pair of assists in the contest.
The Panthers and Lady Panthers will be hitting the road for their next three contests, with stops in Lee County (Jan. 9), Albany (Jan. 12), and Cairo (Jan. 15). The ASHS teams will return to their home court on Jan. 16 to take on Thomas County Central at the Panther Den. 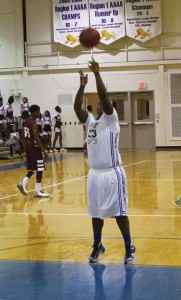 Michael Murray/Americus Times-Recorder:
ASHS’ Ben Walters tosses up a free throw during a mid-December contest in Americus. Walters contributed 10 points to the Panthers’ 50-49 victory over Bainbridge on Jan. 2.