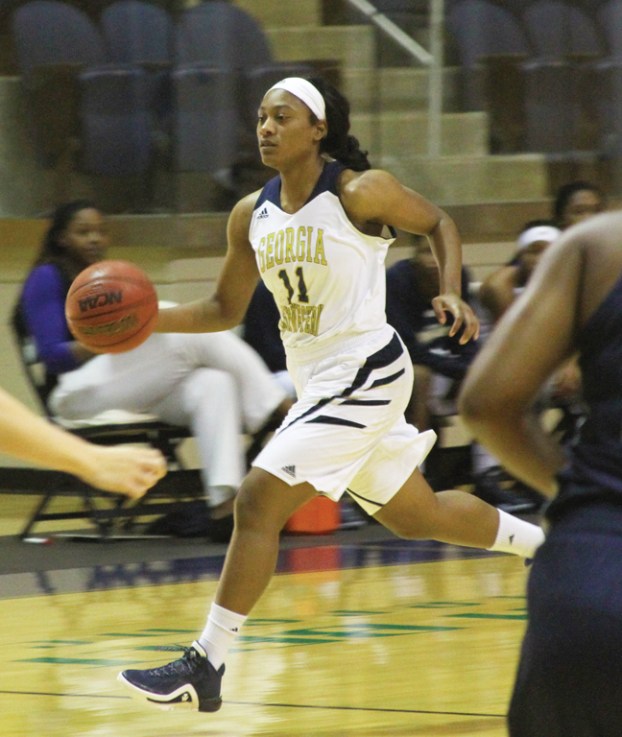 Michael Murray/Americus: Times-Recorder GSW’s Kenyona Armstrong moves the ball down the court during the first half of a mid-December showdown at the Storm Dome in Americus.

The Georgia Southwestern women’s basketball team is now 6-5 and 0-3 in the Peach Belt Conference after a 63-52 loss to the University of Montevallo (4-6 (1-2 PBC)) on Jan. 2 in Montevallo, AL., followed by another narrow 62-60 overtime defeat by Georgia College in Milledgeville.
In the Lady ‘Canes’ 2016 opener, the hosting Falcons started the game with a three-pointer and Yvonna Dunkley responded with a lay-up. Montevallo put in another three-pointer and a jump shot to lead by six with 7:30 left in the first quarter.
Kenyona Armstrong cut the lead to one point with a lay-up and a three-pointer at the 4:51 mark. Va’Queshia Hall then took the lead for GSW with two jump shots at the 1:43 mark, but Montevallo put in a basket with one second left to lead 12-11 at the end of the first frame.
Montevallo posted 19 points in the second quarter to lead 31-23 at the half.
Khayla Owens put in two baskets for GSW to kick-start the third quarter. Chanice Whitton put in a lay-up followed by Ja’Quasha Sesler with another lay-up to bring the visiting team within four points of Montevallo.
The Falcons made two free throws and Sesler immediately answered with a three-pointer. Dunkley put in a lay-up to come within one point with 4:47 left in the third.
Montevallo quickly added seven more points to take an eight point lead into the final quarter.
Hall made the first basket in the fourth to trail by six and made another with 6:57 left to narrow the visitor’s deficit to four. Montevallo put in a three-pointer followed by a lay-up to lead by nine with 5:19 left.
Sesler and Dunkley each added buckets to close the gap to five points, but the Falcons scored seven more before GSW answered with a lay-up with at the 14 second mark to take the 11-point win.
Hall led the Lady ‘Canes with 10 points. Dunkley and Sesler both scored nine points and four rebounds. Owens had eight points and had five rebounds. Armstrong had seven points and nine assists. Whitton led GSW with six rebounds and contributed six points.
On Monday afternoon, the Lady ‘Canes rushed themselves off and hit the road for Milledgeville to take on Georgia College.
A late comeback in the final seconds of the game forced an overtime for the Lady ‘Canes in Centennial Center, Georgia College’s home court.
The first quarter was basket for basket for the most part. Georgia College sank the first bucket and Dunkley tied it quickly. Aleah Holden took the lead for GSW with two made free throws and moments later Georgia College retook the advantage.
With 3:16 left in the first quarter, the Bobcats drained a three-pointer to pull ahead 14-8. Owens answered with a lay-up, followed by a three-pointer from  Armstrong to end the first quarter down 14-13.
Emili Russ put GSW ahead by one with a jump shot, which was quickly countered by a 7-0 run from Georgia College.
With 5:27 left in the second quarter, the Bobcats were leading 24-17. Whitney Young sank a three-pointer for the Lady ‘Canes followed by a lay-up from Sesler to narrow the gap to two points.
Georgia College put in another three, coupled with a lay-up to take a seven point advantage with 3:42 left before the half. Hall tossed in one free throw, but the Bobcats countered with a six-point run to lead by 12 with 1:22 remaining.
Hall added four points, followed by Dunkley with a lay-up to close the gap by six and head into half-time down by a 35-29 margin.
The third quarter was low scoring, with the Lady ‘Canes putting up 11 points and the Bobcats posting only 10.
Georgia College looked to be in control in the last quarter, however, with the Lady ‘Canes falling behind by 10 at the 5:17 mark, but GSW proceeded to find their rhythm and stage a comeback.
Dunkley made a jump shot and a three-pointer, followed by Holden with a free throw to bring the Lady ‘Canes within four. The Bobcats answered with a pair of free throws to take a six point lead before Armstrong tossed up another trey. Holden followed with a jump shot and Dunkley connected on two free throws to take a one point lead with 33 seconds left.
Much to the chagrin of GSW fans, the Bobcats made a free throw to tie the game 56-56 and force an overtime period.
Georgia College quickly added three points to retake the lead and GSW snatched it back with a lay-up from Chanice Whitton and two free throws from Dunkley.
The Bobcats were able to put in a last-second bucket, coupled with a free throw and grab the win, 62-60.
Dunkley led GSW, posting a double double with 18 points and 10 rebounds. Hall contributed 12 points with five rebounds.
The Lady ‘Canes out-rebounded the Bobcats 48-29 and out-shot them 41.5% to 35.9%.
GSW is back on the road on Jan. 6 to play Columbus at 5:30 p.m.